Exploring Shame and Guilt When it Matters Most: How Our Reactions to Personally Relevant Transgressions Relate to Well-Being or Distress 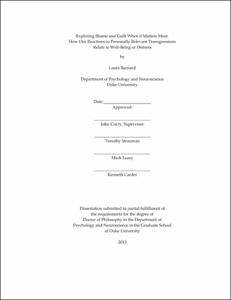 After the committing of an error or transgression, some people are prone to experience shame (they feel badly about themselves) and some are prone to experience guilt (they tend to feel badly about their action or inaction). Although a sizable number of researchers have examined how shame and guilt relate to distress or health, the field knows very little about whether persons are more prone to shame or whether shame is more strongly associated with distress when the error is particularly relevant to the offender's sense of self. The current research aims to address this significant gap in the literature.

One domain in which people's self-view and sense of worth is often heightened is their work or vocation. Clergy have been shown to collapse who they are with what they do or are called to do in their role as pastor. Therefore, a measure that uses failures that clergy may experience in their role was created to examine how this domain specific shame and guilt relate to general shame and guilt, positive and negative affect, and clergy burnout.

Student pastors generated items for the new scale of domain specific shame and guilt. Seminary students completed questionnaires online and were asked to complete the new measure again one month later to establish test-retest reliability. Factor analyses were run to examine the structure of the shame and guilt scales. A secondary factor analysis found that the four guilt factors all loaded onto one second-order factor and the three shame factors all loaded onto another second-order factor. Cronbach's alpha and test-retest reliability were strong. Construct validity was established. Next, United Methodist clergy completed measure by pen and paper or online.

Overall the data demonstrate that higher shame, both in ministry situations and in secular situations, was significantly associated with higher negative affect among seminarians and less satisfaction and more emotional exhaustion in ministry among clergy. Contrary to expectations, seminarians and clergy were not more prone to ministry shame nor was ministry shame more strongly associated with clergy burnout than was general proneness to shame.