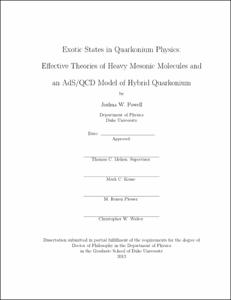 Quantum chromodynamics (QCD), the theory of quarks and gluons, is known to be

the correct description of strong nuclear interactions. At high energy and momenta,

strong force. At low energies and momenta, one should use a different description in

terms of the degrees of freedom relevant at that scale. Two approaches to achieve

this end are effective field theories and gauge/gravity dualities. The former involves

a field theory more or less like QCD itself, but with states which are composites

of quarks and gluons. Then a perturbative expansion is made not in terms of the

gauge coupling but instead in terms of the momentum of the fields. This approach

dates back to the 1970s and is on firm theoretical footing. Gauge/gravity dualities

are a newer and less understood technique, which relates the physics of the strong

time, where the quantity of interest can be computed more readily. We employ

model of hadrons. Candidates for such states, long speculated to exist, have recently

been observed at particle colliders, so that the theory of exotic quarkonium is now