The Role of c-FLIP in the Regulation of Apoptosis, Necroptosis and Autophagy in T Lymphocytes 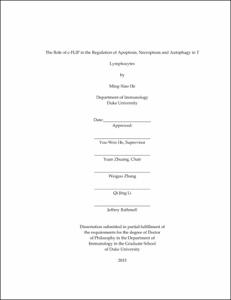 To maintain homeostasis, T lymphocytes die through caspase&ndash;dependent apoptosis. However, blockage of caspase activity in T lymphocytes does not increase cell survival. The loss of caspase 8 activity leads to programmed necrosis (necroptosis) upon T cell receptor (TCR) stimulation in T lymphocytes. Necroptosis is correlated with excessive macroautophagy, an intracellular catabolic process characterized by the sequestration of cytoplasmic compartments through double&ndash;membrane vacuoles. Meanwhile, the proper induction of macroautophagy is required for T lymphocyte survival and function. Cellular caspase 8 (FLICE)&ndash;like inhibitory protein (c&ndash;FLIP) promotes survival in T lymphocytes. c&ndash;FLIP suppresses death receptor&ndash;induced apoptosis by modulating caspase 8 activation. Whether this modulation plays a role in the regulation of necroptosis has yet to be studied. Additionally, overexpression of c&ndash;FLIP reduces autophagy induction and promotes cell survival in cell lines. It remains unclear whether c&ndash;FLIP protects primary T lymphocytes by regulating the threshold at which autophagy occurs. In this study, c&ndash;FLIP isoform&ndash;specific conditional deletion models were used to study the role of c&ndash;FLIP in necroptosis and autophagy in primary T lymphocytes.

Apoptosis can be induced by either death receptors on the plasma membrane (extrinsic pathway), or the damage of the genome and/or cellular organelles (intrinsic pathway). Previous studies in c&ndash;FLIP&ndash;deficient T lymphocytes suggested that c&ndash;FLIP promotes cell survival in the absence of death receptor signals. Independent of death receptor signaling, mitochondria sense apoptotic stimuli and mediate the activation of caspases. Whether c&ndash;FLIP regulates mitochondrion&ndash;dependent apoptotic signaling remains unknown. Here, by deleting the <italic>c&ndash;Flip <italic> gene in mature T lymphocytes, we showed a role for c&ndash;FLIP in the intrinsic apoptosis pathway. In naïve T cells stimulated with the apoptosis inducer, c&ndash;FLIP suppressed cytochrome c release from mitochondria. Bim&ndash;deletion rescued the enhanced apoptosis in c&ndash;FLIP&ndash;deficient T cells, while inhibition of caspase 8 did not. Different from activated T cells, there were no signs of necroptosis in c&ndash;FLIP&ndash;deficient naïve T cells. Together, our findings indicate that c&ndash;FLIP is a key regulator of apoptosis, necroptosis and autophagy in T lymphocytes.