The Study of Fork Processing and DSB Repair in Bacteriophage T4: Roles of the MR Complex and Endonuclease VII 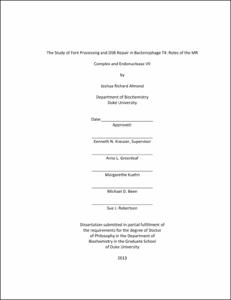 We studied the different characteristics of DNA recombination using bacteriophage T4 as a model system. Phage T4 is a well-characterized virus that infects Escherichia coli. Phage T4 has a simple genome that encodes for almost all of the proteins involved in its own replication, recombination, and repair. At late times of infection, phage T4 predominantly uses recombination-dependent replication (RDR) to replicate its DNA. This recombination-dependent replication system is very similar to homologous recombination used by higher organisms. One major advantage of using phage T4 as a model system is that unlike other model systems, "lethal" mutations can be examined in T4 using strains that suppress specific mutations. Using this system, we investigated a few of the phage T4 proteins (homologous with higher organism proteins) that are thought to be involved in DSB repair and replication fork processing and whose roles are not yet fully defined.

One such protein that we studied was gene product 47 (gp47). The gp47 protein is a member of the bacteriophage T4 Mre11/Rad50 complex and is homologous to the human Mre11 protein (gp47 will be referred to as T4 Mre11). We investigated the in vivo functions of T4 Mre11 in double-strand end processing, double-strand break repair, and recombination-dependent replication. Specifically, we tested the importance of the conserved histidine residue in nuclease Motif I (catalytic active site) of the T4 Mre11 protein. Substitution with multiple different amino acids (including serine) failed to support phage growth, completely blocked plasmid recombination-dependent replication, and led to the stabilization of double-strand ends. Our collaborator, Dr. Scott Nelson, also constructed and expressed a T4 Mre11 mutant protein with the same conserved histidine changed to serine. The mutant protein was found to be completely defective for nuclease activities, but retained the ability to bind T4 Rad50 and double-stranded DNA. These results indicate that the nuclease activity of T4 Mre11 is critical for phage growth and recombination-dependent replication during T4 infections.

Another such protein that we studied was gene product 46 (gp46). The gp46 protein is the other member of the bacteriophage T4 Mre11/Rad50 complex and is homologous to the human Rad50 protein (gp46 will be referred to as T4 Rad50). We investigated the in vivo functions of T4 Rad50 in double-strand end processing, double-strand break repair, and recombination-dependent replication. Specifically, we tested different aspects of the protein such as the Signature motif, which is part of the nucleotide binding domain (ATPase active site). Substitution with different ATPase-deficient mutations completely blocked plasmid recombination-dependent replication and led to the stabilization of double-strand ends. These results indicate that the ATPase activity of T4 Rad50 is critical for recombination-dependent replication during T4 infections.

Finally, we investigated Endonuclease VII (gp49), which is encoded by gene 49. EndoVII was the first endonuclease shown to cleave Holliday junctions in vivo and was shown to cleave stalled replication forks in vitro. We were interested in investigating the proposed regulation of EndoVII expression along with EndoVII's role in replication fork processing. Specifically, we used the EndoVII hairpin mutation to address the proposed regulation of EndoVII expression. In the presence of WT EndoVII we observed only the full-length EndoVII protein, whereas in the presence of the EndoVII hairpin mutant, we observed no EndoVII protein. This result indicates that EndoVII is not regulated to express different length proteins at different times of infection.

We also used the EndoVII hairpin mutation to investigate EndoVII's role in replication fork processing. We generated phage strains to monitor EndoVII's effect on recombination using a phage x phage recombination assay. We observed no difference in recombination between WT and HP- strains. Taken with the above conclusions, we propose that the EndoVII hairpin mutation disrupts the late promoter and reduces the amount of active EndoVII available. In turn, this would affect the phage's ability to package its DNA due to unresolved recombination junctions and its ability to survive.