Exit the Matrix, Enter the System: Capitalizing on Black Culture to Create and Sustain Community Institutions in Post-Katrina New Orleans 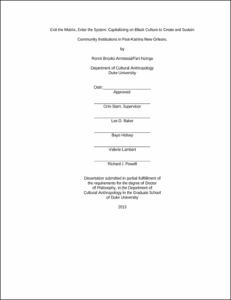 After the devastation wrought by Hurricanes Katrina and Rita in the Fall of 2005, millions of dollars of Northern philanthropic aid have poured into the Gulf Coast, as have volunteers, rebuilding professionals, and NGO workers. Subsequently, New Orleans has witnessed an explosion of NGOs and Social Enterprises, all intent on rebuilding the city and "doing good" for its residents. However, it was not simply the opening of the economic floodgates that has drawn so many outsiders to the city, it was also the threat to New Orleans' mythic exceptionalism as the so-called "Creole Capital," which has spurred so many willing foot soldiers to action. Drawing on ethnographic material gleaned from participant observation, interviews, and some archival research, this dissertation attempts to demystify the social and cultural forces shaping New Orleans' ongoing process of rebuilding and recovery. Special attention is paid to the role of the arts and of aesthetics as political tools, and forms of capital available to Black actors. Illuminating the political and economic contexts within which the work of community building takes place reveals both the possibilities and the limitations which face Black New Orleanians, embedded in this dynamic landscape. Attending to external forces as well as internal relationships, it becomes clear that Black artist-activists see institution-building as a way to 1) build upon some of the only forms of capital available to Black New Orleanians - that is, social and cultural capital; 2) organize Black communities and begin to exercise some forms of Black Power; and 3) to sustain local social movements.