The Maintenance of Genetic Variation by Environmental Selection 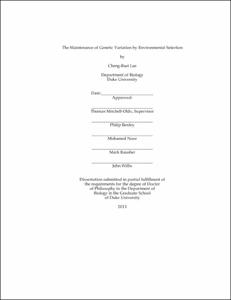 A biological species is formed by a mating pool of individuals, and for two populations of the same species, differentiation is often homogenized by gene flow. Reproductive isolation between populations allows genetic differentiation, and therefore speciation, the process in which full reproductive isolation is achieved between populations, plays important role in generating biodiversity. In the second part of my dissertation I used Boechera stricta to address how environmental selection contributes to speciation. In Chapter 3, I used niche modeling to show that environmental factors have more important roles than geographical distance in the genetic differentiation of EAST and WEST subspecies, and local water availability is the most important factor. In Chapter 4, I performed large-scale greenhouse experiments to identify key traits responsible for the EAST-WEST local adaptation, and that those traits have significantly larger differentiation between subspecies than neutral expectation. In Chapter 5, I performed quantitative trait loci mapping for those important traits and fitness in both parental environments and greenhouse. In summary, the second part of my dissertation provides an example to study ecological speciation from the environment, trait, to the genetic level.