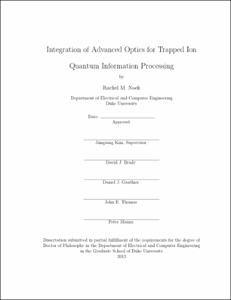 Trapped ion systems are the leading candidate for quantum information processing because many of the critical components have already been demonstrated. Scaling trapped ion systems to large numbers of ions is currently believed possible, but much work remains to prove it. Microfabricated surface ion traps are increasing in popularity for their ease of mass production and their ability to manipulate individual ions and interact arbitrary pairs of ions. Even with the advent of scalable ion traps, detection of an individual ion trapped in a high vacuum poses a challenge. The internal state of the ion chosen for a quantum bit can be measured via exposure to a probe beam that causes one state to scatter light (a "bright" state), but not the other state (a "dark" state). In free space, a single ion acts like a point source that emits in all directions; a standard two inch lens system can only collect about 2% of the light emitted by the ion. Poor light collection results in a high error rate and slow determination of the internal state of the ion. Fast, high fidelity state detection is necessary for quantum error correction and loophole-free Bell experiments at short (less than 100\,km) distances, and high efficiency collection is necessary to rapidly interconnect separate quantum computers. We demonstrate state detection fidelities of 99%, 99.856(8)% and 99.915(7) % which correspond to detection times of 10.5, 28.1 and 99.8 us, respectively.