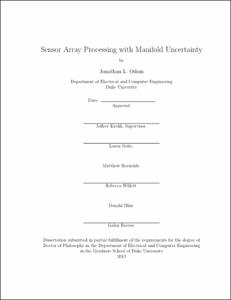 The spatial spectrum, also known as a field directionality map, is a description of the spatial distribution of energy in a wavefield. By sampling the wavefield at discrete locations in space, an estimate of the spatial spectrum can be derived using basic wave propagation models. The observable data space corresponding to physically realizable source locations for a given array configuration is referred to as the array manifold. In this thesis, array manifold ambiguities for linear arrays of omni-directional sensors in non-dispersive fields are considered.

First, the problem of underwater a hydrophone array towed behind a maneuvering platform is considered. The array consists of many hydrophones mounted to a flexible cable that is pulled behind a ship. The towed cable will bend or distort as the ship performs maneuvers. The motion of the cable through the turn can be used to resolve ambiguities that are inherent to nominally linear arrays. The first significant contribution is a method to estimate the spatial spectrum using a time-varying array shape in a dynamic field and broadband temporal data. Knowledge of the temporal spectral shape is shown to enhance detection performance. The field is approximated as a sum of uncorrelated planewaves located at uniform locations in angle, forming a gridded map on which a maximum likelihood estimate for broadband source power is derived. Uniform linear arrays also suffer from spatial aliasing when the inter-element spacing exceeds a half-wavelength. Broadband temporal knowledge is shown to significantly reduce aliasing and thus, in simulation, enhance target detection in interference dominated environments.

Finally, the problem of array manifold ambiguities for static under-sampled linear arrays is considered. Under-sampled arrays are non-uniformly sampled with average spacing greater than a half-wavelength. While spatial aliasing only occurs in uniformly sampled arrays with spacing greater than a half-wavelength, under-sampled arrays have increased spatial resolution at the cost of high sidelobes compared to half-wavelength sampled arrays with the same number of sensors. Additionally, non-uniformly sampled arrays suffer from rank deficient array manifolds that cause traditional subspace based techniques to fail. A class of fully agumentable arrays, minimally redundant linear arrays, is considered where the received data statistics of a uniformly spaced array of the same length can be reconstructed in wide sense stationary fields at the cost of increased variance. The forth significant contribution is a reduced rank processing method for fully augmentable arrays to reduce the variance from augmentation with limited snapshots. Array gain for reduced rank adaptive processing with diagonal loading for snapshot deficient scenarios is analytically derived using asymptotic results from random matrix theory for a set ratio of sensors to snapshots. Additionally, the problem of near-field sources is considered and a method to reduce the variance from augmentation is proposed. In simulation, these methods result in significant average and median array gains with limited snapshots.