Some Recent Advances in Non- and Semiparametric Bayesian Modeling with Copulas, Mixtures, and Latent Variables 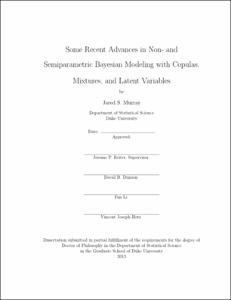 This thesis develops flexible non- and semiparametric Bayesian models for mixed continuous, ordered and unordered categorical data. These methods have a range of possible applications; the applications considered in this thesis are drawn primarily from the social sciences, where multivariate, heterogeneous datasets with complex dependence and missing observations are the norm.

The first contribution is an extension of the Gaussian factor model to Gaussian copula factor models, which accommodate continuous and ordinal data with unspecified marginal distributions. I describe how this model is the most natural extension of the Gaussian factor model, preserving its essential dependence structure and the interpretability of factor loadings and the latent variables. I adopt an approximate likelihood for posterior inference and prove that, if the Gaussian copula model is true, the approximate posterior distribution of the copula correlation matrix asymptotically converges to the correct parameter under nearly any marginal distributions. I demonstrate with simulations that this method is both robust and efficient, and illustrate its use in an application from political science.

The second contribution is a novel nonparametric hierarchical mixture model for continuous, ordered and unordered categorical data. The model includes a hierarchical prior used to couple component indices of two separate models, which are also linked by local multivariate regressions. This structure effectively overcomes the limitations of existing mixture models for mixed data, namely the overly strong local independence assumptions. In the proposed model local independence is replaced by local conditional independence, so that the induced model is able to more readily adapt to structure in the data. I demonstrate the utility of this model as a default engine for multiple imputation of mixed data in a large repeated-sampling study using data from the Survey of Income and Participation. I show that it improves substantially on its most popular competitor, multiple imputation by chained equations (MICE), while enjoying certain theoretical properties that MICE lacks.

The third contribution is a latent variable model for density regression. Most existing density regression models are quite flexible but somewhat cumbersome to specify and fit, particularly when the regressors are a combination of continuous and categorical variables. The majority of these methods rely on extensions of infinite discrete mixture models to incorporate covariate dependence in mixture weights, atoms or both. I take a fundamentally different approach, introducing a continuous latent variable which depends on covariates through a parametric regression. In turn, the observed response depends on the latent variable through an unknown function. I demonstrate that a spline prior for the unknown function is quite effective relative to Dirichlet Process mixture models in density estimation settings (i.e., without covariates) even though these Dirichlet process mixtures have better theoretical properties asymptotically. The spline formulation enjoys a number of computational advantages over more flexible priors on functions. Finally, I demonstrate the utility of this model in regression applications using a dataset on U.S. wages from the Census Bureau, where I estimate the return to schooling as a smooth function of the quantile index.