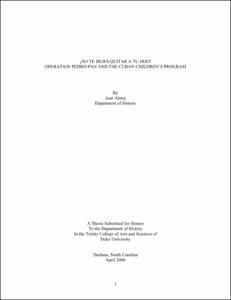 Files
Jean Thesis FINAL COPY.doc
2.7 Mb
Abreu_Honors_Thesis.pdf
1.7 Mb
Date
Author
Abreu, Jean
Repository Usage Stats
878
views
9,766
downloads
Abstract
For most Cubans, Fidel Castro’s revolution was an enormous relief. Castro promised to bring democracy to a country that was only six decades old, to halt social corruption and to end economic dependence on the U.S. In particular, the middle class played a large role in participating in the underground and legitimizing the revolution. Cuban parents would never have guessed that less than two years later, they would be caught up in the turmoil of the Cold War, so desperate to get their families out of the country that they would send their young, unaccompanied children to the U.S., not knowing where they would stay, who would take care of them, or how long the separation would last. But as Cuba quickly became a battleground in the struggle between the U.S. and the Soviet Union, and the Central Intelligence Agency worked overtime to fuel hysteria and backlash against Castro, thousands of parents committed the unthinkable. In fear of their children becoming nationalized and indoctrinated in new president Fidel Castro’s militaristic education model, over 14,000 families sent their children to Miami between 1960 and 1962. This was later dubbed by a reporter in the U.S., “Operation Pedro Pan.” Though the U.S. government feigned support for Castro’s democratic promises through 1960, by September 1959 the CIA had already begun working on a covert mission to oust the new leader. December 1960 marked the first international airlift of children in the Western Hemisphere, when the combined powers of the Catholic Church, the U.S. government, the CIA, and several multinational corporations with interest in Cuba altered the lives of thousands of Cuban families that were caught in the middle of the political vortex. In this thesis the personal history of these 14,000 children is examined in light of the international political and religious tumult which continues to alter U.S.-Cuban relations today.
Description
Winner of the 2008 Robert F. Durden Prize
Type
Honors thesis
Department
History
Subject
Cuban Revolution
Children
Permalink
https://hdl.handle.net/10161/837
Citation
Abreu, Jean (2008). No te dejes quitar a tu hijo: Operation Pedro Pan and The Cuban Children's Program. Honors thesis, Duke University. Retrieved from https://hdl.handle.net/10161/837.
Collections
More Info
Show full item record