The Iranian Hostage Crisis: A War of Words, not Worlds 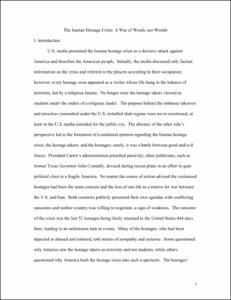 Files
The Iranian Hostage Crisis.doc
107.5 Kb
The Iranian Hostage Crisis.pdf
199.6 Kb
Date
Author
Simon, Andrew
Repository Usage Stats
1,167
views
13,355
downloads
Abstract
U.S. media presented the Iranian hostage crisis as a decisive attack against America and therefore the American people. Initially, the media discussed only factual information on the crisis and referred to the players according to their occupation; however, every hostage soon appeared as a victim whose life hung in the balance of terrorists, led by a religious fanatic. No longer were the hostage takers viewed as students under the orders of a religious leader. The purpose behind the embassy takeover and atrocities committed under the U.S.-installed shah regime were never mentioned, at least in the U.S. media intended for the public eye. The absence of the other side’s perspective led to the formation of a unilateral opinion regarding the Iranian hostage crisis, the hostage takers, and the hostages; surely, it was a battle between good and evil forces. President Carter’s administration preached passivity; other politicians, such as former Texas Governor John Connally, devised daring rescue plans in an effort to gain political clout in a fragile America. No matter the course of action advised the victimized hostages had been the main concern and the loss of one life as a motive for war between the U.S. and Iran. Both countries publicly presented their own agendas with conflicting outcomes and neither country was willing to negotiate, a sign of weakness. The outcome of the crisis was the last 52 hostages being freely returned to the United States 444 days later, leading to an unforeseen turn in events. Many of the hostages, who had been depicted as abused and tortured, told stories of sympathy and remorse. Some questioned why America saw the hostage takers as terrorists and not students, while others questioned why America built the hostage crisis into such a spectacle. The hostages’ accounts of American imperialism and Iranian hardship did not make the ten o’clock news; their stories may have led to a more balanced take on the hostage crisis. I intend not to say which view, the hostages or the medias, was correct or wrong, but to present both sides of the Iranian hostage crisis dialogue and analyze the vivid contrasts between the two; I also intend to analyze the internal divisions within the hostage accounts. In a time of great danger, U.S. politics and media worked as one entity and presented an argument drastically different from that of many hostages.
Description
Winner of the 2008 Robert F. Durden Prize
Type
Course paper
Subject
Iran
Hostage
Media
Khomeini
embassy
Carter
Permalink
https://hdl.handle.net/10161/838
Citation
Simon, Andrew (2008). The Iranian Hostage Crisis: A War of Words, not Worlds. Course paper, Duke University. Retrieved from https://hdl.handle.net/10161/838.
Collections
More Info
Show full item record