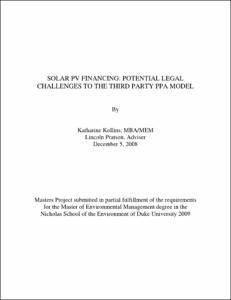 View / Download
276.8 Kb
Date
Author
Kollins, Katharine
Advisor
Pratson, Lincoln
Repository Usage Stats
915
views
4,479
downloads
Abstract
The third-party ownership PPA as a financing mechanism for solar PV has been increasing rapidly over the last few years. Its ability to dramatically lower or remove upfront costs has made it a popular way to obtain a solar PV system for both residential and commercial buildings. However, a number of states do not allow the third-party ownership PPA due to legislation language preventing competition with the monopoly utility or mandating that the third-party owner be regulated by the local public utility commission. The third-party ownership PPA structure is a long-term contract between a customer and a third-party solar PV developer. The developer builds and owns a PV system on the customer’s roof and sells all of the power to the customer. This allows the customer to support solar power while avoiding upfront costs as well as operations and maintenance. In particular, third-party electricity sales have presented legal challenges in a number of regulated states and jurisdictions. These states may have issues with consumer protection, grid safety, or competition with the monopoly utility. A few states have already ruled on the issue (California, Oregon) and potentially provide some legislative guidance for those states looking to exempt third-party ownership PPA providers from regulation. Other states are actively dealing with the issue and have open dockets to determine legality (Nevada, Arizona). Because legislative solutions may be difficult to obtain in some states, especially with the complex nature of PUC integration with state legislation, it is important to look at alternative solutions to the third-party ownership PPA. These include the solar lease, the utility acting as an intermediary, utility ownership of generating assets, the utility waiving monopoly power, registration of DG services providers, and Clean Renewable Energy Bonds.
Type
Master's project
Department
Nicholas School of the Environment and Earth Sciences
Subject
solar
power purchase agreement
renewable energy
Permalink
https://hdl.handle.net/10161/843
Citation
Kollins, Katharine (2008). Solar PV Financing: Legal Challenges to the Third-Party Ownership Model. Master's project, Duke University. Retrieved from https://hdl.handle.net/10161/843.
Collections
More Info
Show full item record