Investigating the relationship between management practices and genetic diversity: a population genetics study of pen shell clam (Atrina tuberculosa) in the Gulf of California, Mexico 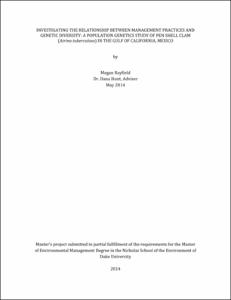 View / Download
3.3 Mb
Date
Author
Rayfield, Megan
Advisors
Hunt, Dana E.
Basurto, Xavier
Repository Usage Stats
398
views
305
downloads
Abstract
The management of commercial fisheries is complicated by the movement of the resource of interest among areas with different management practices. When a species is heavily harvested in one portion of its range, the effects are translated to other fisheries in terms of a decline in abundance, or in some cases, a loss of genetic diversity. Conserving genetic diversity is important, especially in commercially harvested populations, because it provides the population with greater resilience to changing environmental conditions. One popular strategy that fisheries managers use to alleviate the differences in fishing pressures across the entire range of a species is the establishment of marine protected areas. MPAs also act to conserve biodiversity within their boundaries, and many areas of the world’s highest marine biodiversity occur in developing countries where commercial fishing is practiced at small scales. Understanding the interplay between MPAs and small-scale fisheries will allow for the most comprehensive management decisions. My research uses molecular techniques to investigate the levels of genetic diversity between two commercially harvested bivalve populations in the Gulf of California, Mexico in order to evaluate the effectiveness of a community-based MPA in terms of a potential genetic benefit to an open-access fishery. The results show no significant genetic structure or difference in levels of genetic diversity between the two populations, and the lack of private alleles indicates that there is positive gene flow between these two areas by means of larval transport. Despite the influx of larvae from the MPA to the open-access fishery, pen shell abundances continue to decline, and these data suggest that the presence of an MPA adjacent to this open-access fishery is not enough to sustain the population under current harvesting practices.
Type
Master's project
Department
Nicholas School of the Environment and Earth Sciences
Subject
pen shell, population genetics, Gulf of California
Permalink
https://hdl.handle.net/10161/8474
Citation
Rayfield, Megan (2014). Investigating the relationship between management practices and genetic diversity: a population genetics study of pen shell clam (Atrina tuberculosa) in the Gulf of California, Mexico. Master's project, Duke University. Retrieved from https://hdl.handle.net/10161/8474.
Collections
More Info
Show full item record