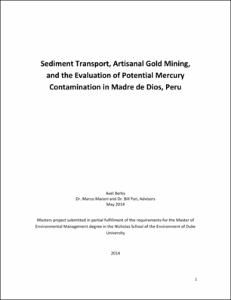 View / Download
1.5 Mb
Date
Author
Berky, Axel
Advisors
Marani, Marco
Pan, William
Repository Usage Stats
405
views
201
downloads
Abstract
In the last several decades, artisanal mining in Madre de Dios, Peru has grown at an exponential rate. The lack of regulation of mining practices and the use of mercury in the gold extraction process has culminated in a human and environmental health risk. Mining practices in Madre de Dios have led to deforestation as well as detrimental health effects in humans. It has also led to mercury contaminated soil that is then transported downriver. This study uses mathematical modeling and geographic information systems (GIS) to better understand sediment transport and quantify potentially contaminated soil transport through a detachment model for the entire Madre de Dios watershed. The model considers spatially‐distributed rainfall, leaf area index, topographic slope, and grain size and determines the spatial patterns of sediment erosion and deposition. The model estimates that erosion has increased 13.1tons/km2/year due to artisanal gold mining, demonstrating that it has had a notable impact at the whole‐watershed scale. However, the environmental impact on the sub‐watershed of Huepetuhe, where much of the gold mining is occurring, is even more substantial, with an additional 840,175 tons/year of sediment being eroded from the areas most affected by mercury contamination. Most of this erosion consists of finer grain sizes that are associated with natural mercury levels and the ability to transport adsorbed mercury. The results overall suggest that mercury from natural or anthropogenic sources could be readily transported downriver and provide indications as to where the resulting mercury contamination may be more severe.
Type
Master's project
Department
Nicholas School of the Environment and Earth Sciences
Subject
GIS, Mercury Contamination, Gold Mining
Permalink
https://hdl.handle.net/10161/8552
Citation
Berky, Axel (2014). Sediment Transport, Artisanal Gold Mining, and the Evaluation of Potential Mercury Contamination in Madre de Dios, Peru. Master's project, Duke University. Retrieved from https://hdl.handle.net/10161/8552.
Collections
More Info
Show full item record