Locales and Mechanisms of TrkB Activation Within Hippocampus 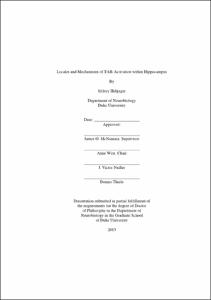 Understanding the mechanisms of limbic epileptogenesis in cellular and molecular terms may provide novel therapeutic targets for its prevention. The neurotrophin receptor tropomyosin-related kinase B (TrkB) is thought to be critical for limbic epileptogenesis. Enhanced activation of TrkB, revealed by immunodetection of enhanced phosphorylated TrkB (pTrkB), a surrogate measure of its activation, has been identified within the hippocampus in multiple animal models. Knowledge of the cellular locale of activated TrkB is necessary to elucidate its functional consequences. Using an antibody selective to pTrkB in conjunction with confocal microscopy and cellular markers, we determined the cellular and subcellular locale of enhanced pTrkB induced by status epilepticus (SE) evoked by infusion of kainic acid into the amygdala of adult mice. SE induced enhanced pTrkB immunoreactivity in two distinct populations of principal neurons within the hippocampus--the dentate granule cells and CA1 pyramidal cells. Enhanced immunoreactivity within granule cells was found within mossy fiber axons and giant synaptic boutons. By contrast, enhanced immunoreactivity was found within apical dendritic shafts and spines of CA1 pyramidal cells. A common feature of this enhanced pTrkB at these cellular locales is its localization to excitatory synapses between excitatory neurons, presynaptically in the granule cells and postsynaptically in CA1 pyramidal cells. Long-term potentiation (LTP) is one cellular consequence of TrkB activation at these excitatory synapses that may promote epileptogenesis.

The importance of TrkB in diverse neuronal processes, as well as its involvement in various disorders of the nervous system, underscores the importance of understanding how it is activated. The canonical neurotrophin ligand which activates TrkB is brain derived neurotrophic factor (BDNF). Zinc, however, has also been demonstrated to activate this receptor through a mechanism whereby it does not directly interact with it, known as transactivation. Presynaptic vesicles of mossy fiber boutons of stratum lucidum are particularly enriched in zinc, where it is co-released with glutamate in an activity dependent fashion, and incorporated into these vesicles by the zinc transporter, ZnT3. Given the presence of large quantities of zinc within stratum lucidum, we hypothesized that this metal may contribute to TrkB transactivation at this locale. To this end, we examined the contributions of both BDNF and synaptic vesicular zinc to TrkB activation in stratum lucidum of mouse hippocampus under physiological conditions. Utilization of mice which are genetic knockouts for BDNF and/or ZnT3 allowed us to examine TrkB activation in the absence of one or both of these ligands. This was done using an antibody for pTrkB in conjunction with confocal microscopy, assaying immunoreactivity at the cellular and synaptic locales within stratum lucidum where pTrkB was previously found to be enriched. Our results suggest that BDNF contributes to TrkB activation within stratum lucidum. Interestingly, ZnT3 mice displayed an increase in BDNF protein and TrkB activation, demonstrating that synaptic zinc regulates BDNF and TrkB signaling at this locale.