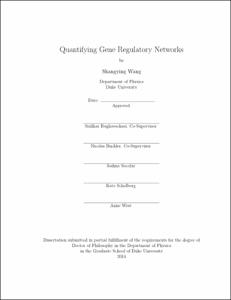 Transcription and translation describe the flow of genetic information from DNA to mRNA to protein. Recent studies show that at a single cell level, these processes are stochastic, which results in the variation of the number of mRNA and proteins even under identical environmental conditions. Because the number of mRNA and protein in each single cell are actually very small, these variations can be crucial for cellular function in diverse contexts, such as development, stress response, immunological and nervous system function. Most studies examine the origin and effects of stochastic gene expression using computer simulations. My goal is to develop a theoretical framework to study activity-dependent gene expression using simplified models that capture essential features.

I have examined the dynamics of stochastic gene regulation in three contexts. First, I examine how fluctuations in promoter accessibility lead to "bursty" transcription, during which genes are turned "on" or "off" stochastically. I describe a mathematical formalism to represent bursty gene expression in a coarse-grained manner as a Markov process and derive a master equation for the time evolution of the probability distribution of the number of mRNA molecules. This allows us to examine how transcript number responds to time varying stimuli. This model forms a basic building block for understanding the signal transmission and noise of the transcription process to time varying inputs as would be sensed by cells in dynamic environments. In addition to synthesis, gene expression is subject to additional modes of regulation. One such mechanism that controls transcript numbers is by microRNAs (miRNAs), which pair with target mRNAs to repress protein production following transcription. Although hundreds of miRNAs have been identified in mammalian genomes, the function of miRNA-based repression in the context of gene regulation networks still remains unclear. I explore the functional roles of feedback regulation by miRNAs and show that protein fluctuations strongly depend on the mode of miRNA-mediated repression. I discuss the functional implications of protein fluctuations arising from miRNA-mediated repression on gene regulatory networks. Finally, I examine the impact of fluctuations on alternative splicing, which is a major source for proteomic complexity in higher eukaryotes. Although the proteins regulating alternative splicing have been extensively studied, little is known about how noise arising from the stochastic nature of alternative splicing contributes to the entire gene expression process. I explore the functional roles and noise properties of alternative splicing, focusing on the case of exon skipping and intron retention. I show that while the overall counts of the mRNAs of the two isoforms are independent and Poisson distributed, diffusion and binding of the splicing factors contributes to the variance in the abundance of the isoforms.

Noise in gene expression may be of particular relevance in the nervous system. Environmental stimuli drive the rapid remodeling of neural circuitry in part by inducing the activation of genes to make proteins that modify neuronal excitability and connectivity, ultimately influencing higher order brain function. Finally, I examine the implications of our studies for activity dependent gene expression in the nervous system.