Individual Differences in Neural Reward and Threat Processing: Identifying Pathways of Risk and Resilience for Psychopathology 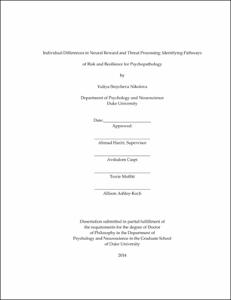 The goal of this dissertation is two-fold: 1) to identify novel biological pathways implicating individual differences in reward and threat processing in the emergence of risk and resilience for psychopathology, 2) to identify novel genetic and epigenetic predictors of the inter-individual variability in these biological pathways. Four specific studies are reported wherein blood oxygen-level dependent functional magnetic resonance imaging (BOLD fMRI) was used to measure individual differences in threat-related amygdala reactivity and reward-related ventral striatum (VS) reactivity; self-report was used to measure of mood and psychopathology as well as the experience of stressful life events. In addition, DNA was derived from peripheral tissues to identify specific genetic and epigenetic markers.

Results from Study 1 demonstrate that individuals with relatively low reward-related VS reactivity show stress-related reductions in positive affect, while those with high VS reactivity remain resilient to these potentially depressogenic effects. Heightened VS reactivity was, however, associated with stress-related increases in problem drinking in Study 2. Importantly, this effect only occurred in individuals showing concomitantly reduced threat-related amygdala reactivity. Study 3 demonstrates that using a multilocus genetic profile capturing the cumulative impact of five functional polymorphic loci on dopamine signaling increases power to explain variability in reward-related VS reactivity relative to an approach considering each locus independently. Finally, Study 4 provides evidence that methylation in the proximal promoter of the serotonin transporter gene is negatively correlated with gene expression and positively correlated with threat-related amygdala reactivity above and beyond the effects of commonly studied functional DNA-sequence based variation in the same genomic vicinity.

The results from these studies implicate novel biological pathways, namely reward-related VS reactivity and threat-related amygdala reactivity, as predictors of relative risk or resilience for psychopathology particularly in response to stressful life events. Moreover, the results suggest that genetic and epigenetic markers may serve as easily accessible peripheral tissue proxies for these neural phenotypes and, ultimately, risk and resilience. Such markers may eventually be harnessed to identify vulnerable individuals and facilitate targeted early intervention or prevention efforts.