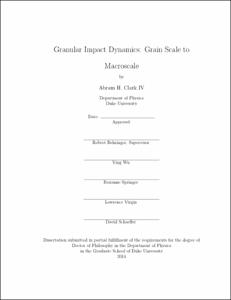 Granular impact, where a foreign object strikes a granular material like sand, is common in nature and industry. Due to experimental difficulties in obtaining sufficiently fast data at the scale of a single grain, a description of this process which connects to physics at the grain-scale is lacking. In this thesis, I will present data from a series of two-dimensional granular impact experiments. By cutting each grain out of a photoelastic material and using a very fast camera, we obtain data on the intruder trajectory, as well as the particle flow and force response of the granular material. Past experiments have shown that the decelerating force on an intruder moving through a granular medium is often well captured by a force law which is dominated by a velocity-squared drag force. Using the intruder trajectories, as well as the flow and force response of the granular material, I will demonstrate that, while these force laws describe the intruder trajectories on slow time scales, the instantaneous force on the intruder is highly fluctuating in space and time. I will particularly focus on the velocity-squared drag force, showing that it arises from random, locally normal collisions with chain-like clusters of particles which send energy and momentum away into the granular material. In this regime, the particles and intruder reach a kind of adiabatic steady state, where the particle motion scales linearly with the intruder speed. However, for impact velocities which are fast compared to the rate of momentum transfer within the granular material, the system response qualitatively changes, behaving like an elastic solid with a shock-like response at impact.