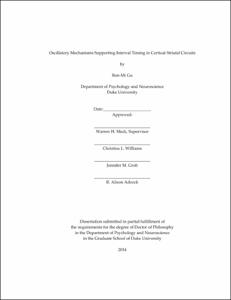 Numerous studies have explored brain activities in relation to timing behaviors from spike firing rates to human neuroimaging signals; however, not many studies have explored functional relations between neural oscillation and timing behavior. Neural oscillations are recently being considered as a fundamental aspect of brain function that modulate broad ranges of cognitive processes. Striatal-beat frequency model (SBF) also proposed that oscillatory properties of neurons are the critical feature that underlies timing behavior. In order to reveal the functional relations between neural oscillations and timing behavior, multiple timing paradigms have trained in groups of rats, and the neural oscillatory patterns during the timing tasks were recorded and analyzed. More specifically, oscillatory patterns that are involved in duration encoding and comparison have been identified using ordinal temporal comparison task. Then, the patterns of theta and delta rhythms have been explored in relation to duration judgment and production. Also, oscillatory patterns underlying interval timing have been compared to the patterns of working memory. The major target areas for those electrophysiological experiments were the cortical-striatal circuits which known for their critical role in timing behavior. Finally, excitatory and inhibitory oscillators (EIO) model has been proposed in order to address oscillatory features underlying interval timing and working memory.