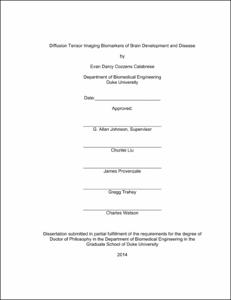 Understanding the structure of the brain has been a major goal of neuroscience research over the past century, driven in part by the understanding that brain structure closely follows function. Normative brain maps, or atlases, can be used to understand normal brain structure, and to identify structural differences resulting from disease. Recently, diffusion tensor magnetic resonance imaging has emerged as a powerful tool for brain atlasing; however, its utility is hindered by image resolution and signal limitations. These limitations can be overcome by imaging fixed ex-vivo specimens stained with MRI contrast agents, a technique known as diffusion tensor magnetic resonance histology (DT-MRH). DT-MRH represents a unique, quantitative tool for mapping the brain with unprecedented structural detail. This technique has engendered a new generation of 3D, digital brain atlases, capable of representing complex dynamic processes such as neurodevelopment. This dissertation explores the use of DT-MRH for quantitative brain atlasing in an animal model and initial work in the human brain.

Chapter 1 describes the advantages of the DT-MRH technique, and the motivations for generating a quantitative atlas of rat postnatal neurodevelopment. The second chapter covers optimization of the DT-MRH hardware and pulse sequence design for imaging the developing rat brain. Chapter 3 details the acquisition and curation of rat neurodevelopmental atlas data. Chapter 4 describes the creation and implementation of an ontology-based segmentation scheme for tracking changes in the developing brain. Chapters 5 and 6 pertain to analyses of volumetric changes and diffusion tensor parameter changes throughout rat postnatal neurodevelopment, respectively. Together, the first six chapters demonstrate many of the unique and scientifically valuable features of DT-MRH brain atlases in a popular animal model.

The final two chapters are concerned with translating the DT-MRH technique for use in human and non-human primate brain atlasing. Chapter 7 explores the validity of assumptions imposed by DT-MRH in the primate brain. Specifically, it analyzes computer models and experimental data to determine the extent to which intravoxel diffusion complexity exists in the rhesus macaque brain, a close model for the human brain. Finally, Chapter 8 presents conclusions and future directions for DT-MRH brain atlasing, and includes initial work in creating DT-MRH atlases of the human brain. In conclusion, this work demonstrates the utility of a DT-MRH brain atlasing with an atlas of rat postnatal neurodevelopment, and lays the foundation for creating a DT-MRH atlas of the human brain.