"A Right to be Safely Born": The Quest for Health Justice for American Mothers and Children, 1890-1965 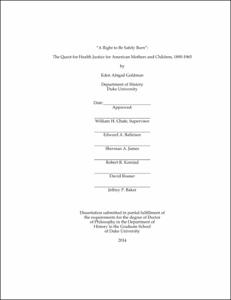 Between 1890 and 1965, the ideology of government responsibility for maternal and child health represented a continuous and central goal that fueled programs and institutional networks of progressive and liberal social policy advocates. Beginning in the settlement houses of the 1890s, a cadre of female bureaucrats, social reformers, and their political allies developed an array of federally based programs. Conservative stakeholders--among them anti-feminists, representatives of the medical industry, anti-communists, and white supremacists--strenuously opposed this vision of health justice, arguing that health was a personal responsibility in which government should play no part. Despite the achievements of government-based progressive reformers in instituting their vision in urban settlement houses, under the Sheppard-Towner Act of the mid-1920s and during the years of the New Deal and World War II, the Cold War's approach to domestic social policy after 1947 clamped down on their vision. After this conservative turn against social democratic solutions to welfare needs, these progressive advocates shifted their attention to the international health rights movement and to community-based maternal and child health activities.

My dissertation introduces the concept of health justice as an interpretive lens to trace the history of health policy progressives and their institutional networks. On the one hand, health justice reflects the communitarian premise that the health of all members of society is essential for the common good. On the other hand, health justice implies that health and health care are individual rights that government ought to protect. While communitarian arguments were often on the tip of the tongues of social reformers, a passionate belief in citizenship-based rights and redistributive and humanitarian ideas of social justice undergirded their policy ideas and became a more explicitly stated position during the New Deal and World War II. This justice-based approach to maternal and child health policy was consistently undermined by the prevailing counter-ideologies of individual responsibility for health, local control of public services, racial segregation in health services, and the commodification of health care.

My work relies on primary evidence collected from the personal papers of key protagonists, the administrative records of the Children's Bureau housed at the National Archives, oral histories, and the presidential papers of Harry S. Truman. Published primary materials have been culled from memoirs, professional public health and medical journals, as well as the popular press. I also draw from a body of historical and political science scholarship of the past twenty-five years to contextualize the narrative.