"No More Shall Be a Dull Book": The Aesthetics of History in Antebellum America 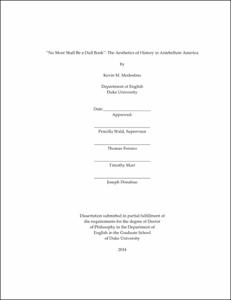 In the first half of the nineteenth century, historians in the United States described their work as an aesthetic practice. The romantic nationalist George Bancroft claimed that historical writing ought to provide readers with a series of beautiful images that would "secure the affections" of the American people for the U.S. Constitution. William H. Prescott, author of volumes on the age of conquest, introduced his most popular work by claiming that he wanted to present his readers with a "picture true in itself" and, through his vividly imaginative descriptions, "to surround them in the spirit of the times." For this generation of historians, their magisterial texts were not simply more or less true accounts of European experience in the New World or the story of the nation's revolutionary origins, they were paintings in words--expressionistic and romantic images that would make the passions, conflicts, and virtues of previous generations available to their readers as an imaginative experience.

Scholars have long understood the various forms of historical consciousness of the nineteenth-century as producing national, imperial, and racial orders in their imagination of the United States as the locus of a linear and progressive flowering of liberty in the New World. My project supplements these totalizing accounts by examining the central texts of nationalist history through the lens of literary analysis to demonstrate how their aesthetic dimensions both enabled and disrupted such a political and temporal imagination. Romantic history emerged in an era of pronounced temporal crisis for the United States. On the surface, these historians sought to provide readers with experiences of an otherwise inaccessible revolutionary past that would help bind a nation confronting fears about dissolution in exponential westward growth, immigration, and the sectional crisis over slavery. Yet, when we look closer at these texts, we realize that they contain covert recognitions of the vitality of struggles for freedom taking place elsewhere--in Haiti, Mexico, or West Indian abolition--that exceeded the terms of U.S. racial republicanism and claimed futures at odds with nationalism's sense of historical preeminence. Both compelled and horrified by the assertion of black freedom throughout the Atlantic world, the beautiful and haunted images of romantic history registered the irruptive force of transatlantic political movements nominally inadmissible within U.S. historical discourse.

While romantic historians developed aesthetic norms for confronting and disavowing alternatives to national orders of time and political progress, abolitionist writers held fast to these disruptions to construct an aesthetics of slave revolution. In the second half of my dissertation, I examine the trajectory of this black radical tradition from the abolitionist historians of the antebellum period to the twentieth-century thinkers who adapted and transformed these aesthetics into a comprehensive anti-imperialism. Considering writings by William C. Nell, Martin R. Delany, W.E.B. Du Bois and C.L.R. James I argue that this tradition did more than reconstruct histories of black political life that had been suppressed by white supremacist orders of knowledge. These writers vitalized history with alternate models of freedom as immediate, proliferating, and eruptive--even when they also sought for signs of racial progress in a linear model. In their vivid descriptions of an experience of freedom that was irreducible to linear models of progress, these texts produced what Walter Benjamin once described as "the constructive principle" in materialist history: "where thinking suddenly halts in a constellation overflowing with tensions, there it yields a shock to the same." This shock of overflowing tensions is the moment when history becomes aesthetic--when imaginative excess overturns the narrative form of history. I ultimately argue that the aesthetics of history can help us reconsider the political stakes of historical scholarship, allowing us to think about the writing of history as an ongoing encounter with freedom that always exceeds the limits of factual, analytical and discursive accounts of what has been.