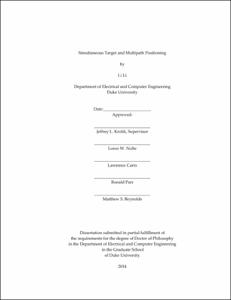 In this work, we present the Simultaneous Target and Multipath Positioning (STAMP) technique to jointly estimate the unknown target position and uncertain multipath channel parameters. We illustrate the applications of STAMP for target tracking/geolocation problems using single-station hybrid TOA/AOA system, monostatic MIMO radar and multistatic range-based/AOA based localization systems. The STAMP algorithm is derived using a recursive Bayesian framework by including the target state and multipath channel parameters as a single random vector, and the unknown correspondence between observations and signal propagation channels is solved using the multi-scan multi-hypothesis data association. In the presence of the unknown time-varying number of multipath propagation modes, the STAMP algorithm is modified based on the single-cluster PHD filtering by modeling the multipath parameter state as a random finite set. In this case, the target state is defined as the parent process, which is updated by using a particle filter or multi-hypothesis Kalman filter. The multipath channel parameter is defined as the daughter process and updated based on an explicit Gaussian mixture PHD filter. Moreover, the idenfiability analysis of the joint estimation problem is provided in terms of Cramér-Rao lower bound (CRLB). The Fisher information contributed by each propagation mode is investigated, and the effect of Fisher information loss caused by the measurement origin uncertainty is also studied. The proposed STAMP algorithms are evaluated based on a set of illustrative numeric simulations and real data experiments with an indoor multi-channel radar testbed. Substantial improvement in target localization accuracy is observed.