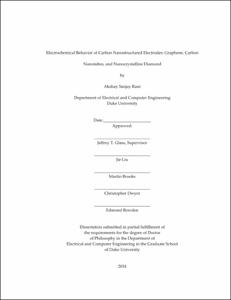 The primary goals of this research were to investigate the electrochemical behavior of carbon nanostructures of varying morphology, identify morphological characteristics that improve electrochemical capacitance for applications in energy storage and neural stimulation, and engineer and characterize a boron-­doped diamond (BDD) electrode based electrochemical system for disinfection of human liquid waste.

Carbon nanostructures; ranging from vertically aligned multiwalled carbon nanotubes (MWCNTs), graphenated carbon nanotubes (g-­CNTs) to carbon nanosheets (CNS); were synthesized using a MPECVD system. The nanostructures were characterized by using scanning electron microscopy (SEM) and Raman spectroscopy. In addition to employing commonly used electrochemical techniques such as cyclic voltammetry (CV) and electrochemical impedance spectroscopy (EIS), a new technique was developed to evaluate the energy and power density of individual electrodes. This facilitated comparison of a variety of electrode materials without having to first develop complex device packaging schemes. It was found that smaller pore size and higher density of carbon foliates on a three-dimensional scaffold of carbon nanotubes increased specific capacitance. A design of experiments (DOE) study was conducted to explore the parametric space of the MWCNT system. A range of carbon nanostructures of varying morphology were obtained. It was observed that the capacitance was dependent on defect density. Capacitance increased with defect density.

A BDD electrode was characterized for use in a module designed to disinfect human liquid waste as a part of a new advanced energy neutral, water and additive-free toilet designed for treating waste at the point of source. The electrode was utilized in a batch process system that generated mixed oxidants from ions present in simulated urine and inactivated E. Coli bacteria. Among the mixed oxidants, the concentration of chlorine species was measured and was found to correlate to the reduction in E. Coli concentration. Finally, a new operating mode was developed that involved pulsing the voltage applied to the BDD anode led to 66% saving in energy required for disinfection and yet successfully reduced E. Coli concentration to less than the disinfection threshold.