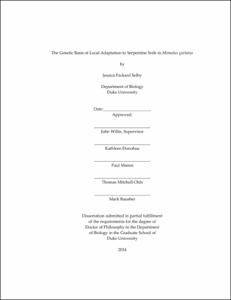 While local adaptation has been frequently demonstrated via reciprocal transplant experiments, our understanding of the genetic basis of it remains minimal. There is a notable lack of studies that identify naturally segregating variants, determine the traits controlled by these variants and characterize their fitness effects in the field. Such studies are critical for understanding how spatially varying selective pressures can drive population divergence and maintain genetic variation. The experiments presented here aim to characterize the genetic basis of local adaptation to serpentine soils in Mimulus guttatus. First, I show that serpentine and non-serpentine populations of M. guttatus are locally adapted to soil habitat wherein non-serpentine plants are unable to survive on serpentine soils. Serpentine tolerance appears to come at a cost as serpentine plants are smaller in the juvenile stage than non-serpentine plants when grown at non-serpentine field sites. These size differences may limit the competitive ability of serpentine tolerant plants in non-serpentine habitats which tend to be more heavily vegetated than serpentine habitats. Next I identify environmental variables that are important selective agents in the serpentine habitat. Using hydroponic assays to isolate an individual chemical variable of serpentine soils - low calcium levels to high magnesium levels (low Ca:Mg ratio) - I show that serpentine and non-serpentine populations of M. guttatus have significant differences in tolerance to low Ca:Mg. I then characterize the genetic basis of these ecotypic differences in survival and tolerance using quantitative trait locus (QTL) mapping. I identify a single, major QTL that controls both the ability to survive on serpentine soils and tolerance to low Ca:Mg ratio which suggests that M. guttatus populations have adapted to serpentine soils through an ability to tolerate the low levels of Ca while simultaneously not suffering from Mg toxicity. Furthermore, I show that this same QTL controls ability to survive on serpentine soils in a second, geographically distant population. However, preliminary work suggests that the two populations are not equally tolerant to each other's soils indicating that either other loci also contribute to serpentine tolerance and these are not shared between the two serpentine populations or that there are different serpentine tolerance alleles at the major QTL are not functionally equivalent. This work addresses long-standing questions in evolutionary biology regarding the number and effect size of loci that underlie adaptive traits by identifying a large effect locus that contributes to adaptive differences between M. guttatus populations.