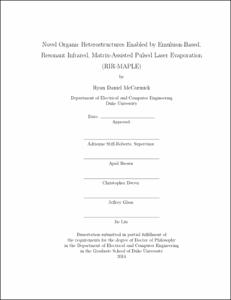 An explosion in the growth of organic materials used for optoelectronic devices is linked to the promise that they have demonstrated in several ways: workable carrier mobilities, ease of processing, design flexibility to tailor their optical and electrical characteristics, structural flexibility, and fabrication scalability. However, challenges remain before they are ready for prime time. Deposition of these materials into ordered thin films requires that they be cast from solutions of organic solvents. Drawbacks of solution-casting include the difficulty of producing layered films without utilizing orthogonal solvents (or even with orthogonal solvents), the difficulty in controlling domain sizes in films of mixed materials, and the lack of parameter options used to control the final properties of thin films. Emulsion-based, resonant infrared, matrix-assisted pulsed laser evaporation (RIR-MAPLE) is a thin film deposition technique that is demonstrated to provide solutions to these problems.

This work presents fundamental research into the RIR-MAPLE process. An investigation of the molecular weight of deposited materials demonstrates that emulsion-based RIR-MAPLE is capable of depositing polymers with their native molecular weights intact, unlike other laser deposition techniques. The ability to deposit multilayer films with clearly defined interfaces is also demonstrated by cross-sectional transmission electron microscopy imaging of a layered polymer/quantum dot nanocomposite film. In addition, trade-offs related to the presence of surfactant in the target, required to stabilize the emulsion, are articulated and investigated by x-ray diffraction, electrical, optical, and surface characterization techniques. These studies show that, generally speaking, the structural, optical and electrical properties are not significantly affected by the affected by the presence of surfactant, provided that the concentration within the target is sufficiently low. Importantly, the in-plane mobility of RIR-MAPLE devices, determined by organic field effect transistor (OFET) characterization, rivals that of spin-cast devices produced under similar conditions.

This work also presents results of emulsion-based RIR-MAPLE deposition applied to optical coatings (gradient-refractive index antireflection coating based on porous, multilayer films) and optoelectronic devices (organic photovoltaics based on the polymer, P3HT, and small molecule, PC61BM, bulk heterojunction system). The optical coating demonstrates that RIR-MAPLE is capable of producing nanoscale domain sizes in mixed polymer blends that allow a film to function as an effective medium relevant to devices in the visible spectrum. Moreover, bulk heterojunction organic photovoltaic (OPV) devices that require nanoscale domains to function effectively are achieved by co-deposition of P3HT and PC61BM, achieving a power conversion efficiency of 1.0%, which is a record for MAPLE-deposited devices.

Results of these studies illuminate unique capabilities of the RIR-MAPLE process. Multilayer films are readily fabricated to create true bilayer OPV structures. Additionally, true gradient thin films are created by varying the ratio of two materials, including two-polymer films and a film consisting of a polymer and a small molecule, over the course of a single deposition.