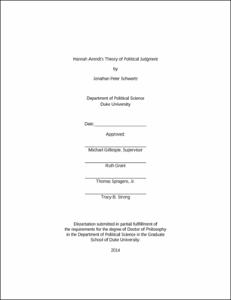 Hannah Arendt's theory of political judgment has been an ongoing perplexity among scholars who have written on her. As a result, her theory of judgment is often treated as a suggestive but unfinished aspect of her thought. Drawing on a wider array of sources than is commonly utilized, I argue that her theory of political judgment was in fact the heart of her work. Arendt's project, in other words, centered around reestablishing the possibility of political judgment in a modern world that historically has progressively undermined it. In the dissertation, I systematically develop an account of Arendt's fundamentally political and non-sovereign notion of judgment. We discover that individual judgment is not arbitrary, and that even in the complex circumstances of the modern world there are valid structures of judgment which can be developed and dependably relied upon. The result of this work articulates a theory of practical reason which is highly compelling: it provides orientation for human agency which does not rob it of its free and spontaneous character; shows how we can improve and cultivate our political judgment; and points the way toward the profoundly intersubjective form of political philosophy Arendt ultimately hoped to develop.