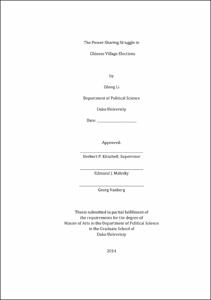 After initiating the economic reform in 1978 and the subsequent political decentralization, Chinese Communist Party (CCP) largely lost its political control in rural areas. To regain the power, the CCP senior leaders decided to introduce the elections as a strategy to rebuild the legitimacy. After enforced all over the country, the village elections did help ameliorate the local governance and prompt the provision of public goods. However, the unclear stipulation in the Organic Law of Village Elections simultaneously resulted in some institutional outcomes, leading to a power-sharing puzzle between local party branch and the elected village committee. Using the local public policy as an indicator, I will develop a formal model in this paper to explain this puzzle and argue that when facing unpopular policies mandated from above, the struggle between local party secretary and village chief is in equilibrium. To maintain the stability in rural areas, the government leaders in different provinces have put forward various solutions to deal with the conflict, including a political experiment, which was called "Qingxian Model" later, conducted in Qing County of Hebei Province. With a field study, I argue in this paper that by resurrecting the Villager Representative Assembly, this political reform essentially reconcentrates the power to the party branch and sabotages the local democracy in the long run.