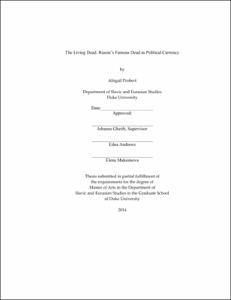 This thesis examines how the dead bodies of the Romanovs and of Vladimir Lenin are used as political and cultural capital in attempts to legitimate and shape Russia's post-Soviet government. The first chapter shows how the reburial of the Romanovs invoked tsarist imagery as part of a larger series of invocations of the tsarist past by then-President Boris Yeltsin and other groups to build a new government. However, due to political tension and infighting the only group that benefited from the reburial of the Romanovs was the Russian Orthodox Church. The second chapter explores how the embalmed body of Vladimir Lenin is problematic by being unburied and being a reminder of Soviet times. Both of these chapter use newspaper articles, speeches, and interdisciplinary analysis of academic text to show how Boris Yeltsin, Vladimir Putin, and the Russian Orthodox Church built, or attempted to build, stability in post-Soviet Russia.

This thesis shows that the dead bodies of Romanovs and Lenin have been used by people in power as a type of political currency, with varying degrees of success. Additionally, this thesis explores how these two sets of bodies demonstrate the importance of the past, both Tsarist and Soviet, in shaping Russia's government.