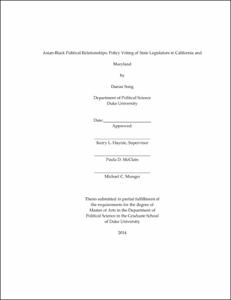 Asian-black political relations in the United States have been most frequently examined in the arena of urban/local politics and especially in terms of the degree of conflict and competition. No previous study on Asian-black relations outside of the local realm has been pursued. Given the small but growing numbers of Asian American elected officials, Asian Americans' political and social relations with other minority political elites are becoming an especially salient and relevant concern, and will likely become even more significant over time. By moving beyond the urban arena, this study attempts to systemically assess Asian-black relations in the state level politics with the central aim of analyzing their nature whether those relations take the forms of conflict or cooperation. Analyzing state legislative roll call votes from California and Maryland on selected issues from 1999 to 2014, I show that black representatives have very supportive/cohesive voting records on the most salient concerns of Asians and that Asian representatives also have supportive voting records on the most salient concerns of blacks but slightly less than the blacks'. The findings indicate that Asian and black state legislators support each to a higher degree than party affiliation might alone suggest, and also suggest the absence of conflict that is often found in urban-level politics.