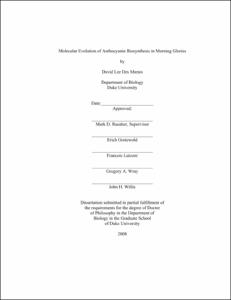 Determining the genetic basis of adaptation has become a central focus of evolutionary biology, and the incorporation of increasingly sophisticated analytical tools from molecular biology has made identifying causal genes a practical reality. The work presented herein addresses the effects of pleiotropic constraint on evolutionary change at the level of individual genes and genetic networks. In the first chapter, I combine molecular phylogenetic analyses and direct assays of enzymatic function to determine the evolutionary processes following a gene duplication in the anthocyanin pathway. My results show that, prior to duplication, the DFR gene was constrained from functional improvement by its multiple enzymatic roles. Following duplication, this constraint was released and adaptive evolution proceeded along both paralog lineages. In the second chapter, I determine the molecular genetic basis of a flower color transition that is associated with change in pollinator attraction in morning glories. A regulatory change in a branching gene in the flavonoid biosynthetic pathway restricted flux down the cyanidin-producing branch, conferring nearly exclusive production of red pelargonidin pigment in flowers. I further demonstrate that this regulatory change was restricted to floral tissue, and that ancestral pathway flux predominates in vegetative tissues. I propose that deleterious pleiotropic effects prevented evolutionary change via enzymatic changes in the pathway due to the numerous essential products downstream of this branching point. Together, these two results show that evolutionary change may be constrained by the molecular genetic context in which prospective adaptive mutations occur.