Reframing Youth Apathy in Jordan: An Anarchist Approach to Politics in the Hashemite Kingdom 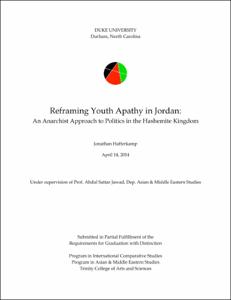 View / Download
3.8 Mb
Date
Author
Hafferkamp, Jonathan
Repository Usage Stats
521
views
692
downloads
Abstract
The Arab Spring’s intense, mass popular protests demonstrate young people’s capacity to catalyze significant social and political change throughout the Middle East. Interestingly, the Hashemite Kingdom of Jordan appears to be among the few countries where these widespread political shifts barely seemed to register in terms of comparable movements. This is particularly unexpected given Jordan’s central regional location and large youth majority (almost 70% of the population is under the age of thirty). Many older Jordanians describe Jordan’s youth as apathetic and disinterested in politics. However, this is a convenient, hegemonic story that may only partially explain the absence of a Hashemite “Spring.” My thesis challenges the notion of the “apathetic young Jordanian,” through an analysis of the political engagement and opinions of the underrepresented youth in Jordan. During the fall of 2012, I performed original research and data collection in Amman, Jordan (8 interviews and 126 surveys), after which it became apparent that young Jordanians are deeply interested in politics, and not simply indifferent to elections and the “Springs” occurring around them. Using a combination of fieldwork interviews and surveys in conjunction with theoretical analysis, this thesis attempts to situate apathy as an active mode of response in a period of regional and domestic political shifts. Throughout this thesis, I analyze Jordanians’ political system and the historical context for their current situation, as well as the phenomenon of the “political street,” utilizing an Anarchist approach to better analyze the dynamic nature of power relations and youth political involvement in Jordan. Ultimately, this analysis offers an intriguing and innovative application of Anarchist concepts, reframing traditional understandings of political “apathy” and the prevalent generalizations of young Jordanians. In conclusion, I present my findings from the interviews and surveys, providing more contextual evidence for the thesis, thereby demonstrating that apparent indifference or political nonparticipation can actually be a form or means of engagement. Young Jordanians are not politically indifferent or disengaged, but rather victimized and ignored by the prevailing power relations within the Hashemite Kingdom.
Description
honors thesis; awarded double honors with Asian and Middle Eastern Studies
Type
Honors thesis
Department
International Comparative Studies
Subject
Jordan, political engagement, youth, apathy, nonparticipation, Arab Spring
Permalink
https://hdl.handle.net/10161/8871
Citation
Hafferkamp, Jonathan (2014). Reframing Youth Apathy in Jordan: An Anarchist Approach to Politics in the Hashemite Kingdom. Honors thesis, Duke University. Retrieved from https://hdl.handle.net/10161/8871.
Collections
More Info
Show full item record