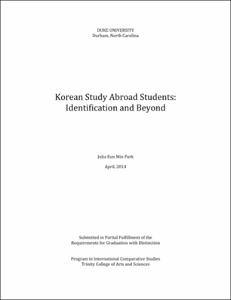 View / Download
1.1 Mb
Date
Author
Park, Julia Eun Min
Repository Usage Stats
572
views
5,253
downloads
Abstract
Study abroad has become a permanent addition to the Korean education spectrum, but the existing research has not addressed the differences that exist between the subgroups within the Korean study abroad community. This study explores how Korean study abroad students construct their identity during the course of their study abroad in the United States, using the social identity theory and the concepts of the Other, in-group/out-group, identity practice and identity performance. The main argument of this thesis is two-folds: 1) The students’ identity and group affiliation shifts in response to social context, commonly between the first and second stages of study abroad; 2) While the students’ identity may be aligned with their in-group, their identity performance shifts depending on spatial and social context. The argument is based on data collected through unstructured interviews with eight undergraduate students at Duke University who have graduated from different types of high schools in Korea and the United States.
Type
Honors thesis
Department
International Comparative Studies
Subject
Korea, study abroad, Duke University, English language, identity practice, identity performance
Permalink
https://hdl.handle.net/10161/8873
Citation
Park, Julia Eun Min (2014). Korean Study Abroad Students: Identification and Beyond. Honors thesis, Duke University. Retrieved from https://hdl.handle.net/10161/8873.
Collections
More Info
Show full item record