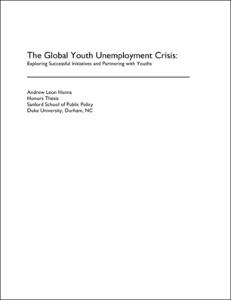 View / Download
1.2 Mb
Date
Author
Hanna, Andrew Leon
Repository Usage Stats
1,437
views
9,948
downloads
Abstract
Labeled the “global youth unemployment disaster” by world leaders, the issue of youth unemployment is one that demands the attention of governments, businesses, and NGOs in developing and developed economies alike. Globally, youths are three times more likely than adults to be unemployed, and over 350 million young people are not engaged in education, employment, or training (NEET). With a demographic bulge that means about 3.5 billion global citizens are below the age of 25, there is a high level of urgency in addressing this concern. This study first conducts a region-by-region analysis of five areas affected greatly by youth unemployment, analyzing factors unique to particular areas and common aspects of the problem. In exploring four shared issues – a skills gap between students and employers, a lack of skills among NEETs, a lack of awareness of job opportunities, and a lack of support for youth-led entrepreneurship – this study identifies five groups of corresponding initiatives and policies that have had success and can potentially be scaled. These solutions include apprenticeship programs for students, skills-building initiatives for unengaged youths, more prevalent vocational schooling, job awareness-raising initiatives, and programs to invest in and incentivize youth-led entrepreneurship. The study then analyzes the perspective of young people themselves regarding these problems and solutions, and asks for their own ideas. The “Global Youth Leader Questionnaire,” a web-based survey taken by 50 global youth leaders from 30 nations, gathered results that include young leaders’ perspectives on the realities of life as an unemployed youth, evaluations of the potential solutions discussed, ideas for other solutions, accounts of youth-led development initiatives that are working in their countries, and views on the state of youth involvement in decision-making. Finally, the study proposes that the best way for institutions – governments, businesses, educational institutions, and NGOs – to go about designing, scaling up, and driving impactful initiatives is to partner with youths, harnessing their ideas and abilities in tackling the challenge of youth unemployment.
Description
"The Global Youth Unemployment Crisis" was originally submitted as Andrew Leon Hanna's Duke University senior honors thesis. It was awarded Honors with Highest Distinction from the faculty of the Sanford School of Public Policy. The work was written under the advisorship of Dr. Giovanni Zanalda and draws on some previous research from Hanna's previous work entitled "The Socioeconomic Mobility of Youths" under the advisorship of Dr. Anirudh Krishna. Support for research came from the Robertson Scholars Leadership Program and instrumental in building the relationships that composed the study's questionnaire respondent group were the United States Department of State, the United Nations, and the British Council.
Type
Honors thesis
Department
Public Policy Studies
Subject
Global, Youth, Unemployment, Public Policy, Economics
Permalink
https://hdl.handle.net/10161/9024
Citation
Hanna, Andrew Leon (2014). The Global Youth Unemployment Crisis: Exploring Successful Initiatives and Partnering with Youths. Honors thesis, Duke University. Retrieved from https://hdl.handle.net/10161/9024.
Collections
More Info
Show full item record