Informatic Opacity: Biometric Facial Recognition and the Aesthetics and Politics of Defacement 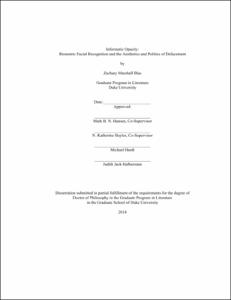 Confronting the rapidly increasing, worldwide reliance on biometric technologies to surveil, manage, and police human beings, my dissertation <italic>Informatic Opacity: Biometric Facial Recognition and the Aesthetics and Politics of Defacement</italic> charts a series of queer, feminist, and anti-racist concepts and artworks that favor opacity as a means of political struggle against surveillance and capture technologies in the 21st century. Utilizing biometric facial recognition as a paradigmatic example, I argue that today's surveillance requires persons to be informatically visible in order to control them, and such visibility relies upon the production of technical standardizations of identification to operate globally, which most vehemently impact non- normative, minoritarian populations. Thus, as biometric technologies turn exposures of the face into sites of governance, activists and artists strive to make the face biometrically illegible and refuse the political recognition biometrics promises through acts of masking, escape, and imperceptibility. Although I specifically describe tactics of making the face unrecognizable as "defacement," I broadly theorize refusals to visually cohere to digital surveillance and capture technologies' gaze as "informatic opacity," an aesthetic-political theory and practice of anti- normativity at a global, technical scale whose goal is maintaining the autonomous determination of alterity and difference by evading the quantification, standardization, and regulation of identity imposed by biometrics and the state. My dissertation also features two artworks: <italic>Facial Weaponization Suite</italic>, a series of masks and public actions, and <italic>Face Cages</italic>, a critical, dystopic installation that investigates the abstract violence of biometric facial diagramming and analysis. I develop an interdisciplinary, practice-based method that pulls from contemporary art and aesthetic theory, media theory and surveillance studies, political and continental philosophy, queer and feminist theory, transgender studies, postcolonial theory, and critical race studies.