Non-viral Transfection and Direct Reprogramming of Fibroblasts to Neurons and Glia: Importance of Physical and Chemical Microenvironments 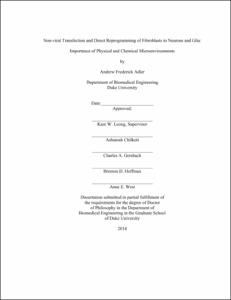 The recent discovery that fibroblasts can be reprogrammed directly to functional neurons with lentivirus has reinvigorated the belief that autologous human cell therapies against many neurodegenerative diseases may be achievable in the near future. To increase the clinical translatability of this approach, we have developed a technique to perform this direct conversion without the use of virus. We transfected fibroblasts with plasmids condensed into non-viral nanoparticulate carriers with a bioerodible peptidomimetic polymer, pCBA-ABOL. Gene delivery with pCBA-ABOL was exceptionally effective and nontoxic, producing high transfection efficiencies and enabling serial dosing of plasmid cocktails. We delivered plasmids encoding neural lineage-instructive transcription factors to primary mouse embryonic fibroblasts (PMEFs), eliciting: drastic morphological changes, activation of endogenous neuronal transcription factor expression, neuronal promoter activity, and the appearance of neuronal proteins. Serial dosing of pCBA-ABOL complexes produced increasingly higher yields of these non-virally induced neurons (NiNs). The majority of NiNs fired action potentials under patch clamp. This is the first description of a method capable of directly inducing functional neuronal cells from fibroblasts without the use of virus.

We then moved on to further increase the yield of NiN generation, in an effort to produce a sufficient quantity of neurons for cell therapies. Informed by neurodevelopmental cues and by precedents set by the induced pluripotent stem cell (iPSC) field, we performed non-viral neuronal reprogramming in the presence of soluble microenvironmental factors that either inhibited GSK-3beta; and SMAD signaling, or induced chronic membrane depolarization. Chronic depolarization doubled the number of cells expressing neuronal markers produced with glutamatergic as well as with dopaminergic transcription factor cocktails. Inhibition of GSK-3beta; and SMAD signaling similarly doubled the yield of glutamatergic NiNs, and enabled induction of neuronal markers and morphological transformation in human fibroblasts.

In addition to soluble microenvironmental factors, the physical microenvironment can also strongly influence various cellular phenotypes. This list includes many phenotypes related to endocytosis - the transit mechanism of nanoparticulate gene carriers entering cells during non-viral transfection. As such, we set out to determine if patterned physical substrate topography could be used to increase non-viral transfection. We employed a high-throughput screen of micropitted substrate topographies, and indeed found that larger, denser micropits could support significantly higher transfection efficiencies in fibroblasts, compared to smooth substrates. The same topographies produced higher reverse transfection efficiencies, and greater siRNA-mediated knockdown of a reporter gene. The control of transfection with substrate topography is a new design parameter that could find broad application in in vitro non-viral reprogramming strategies, as well as in the intelligent design of nucleic acid-eluting scaffolds in vivo.

Encouraged by our success with direct neuronal reprogramming, and armed with a greater understanding of some microenvironmental mediators thereof, we attempted to produce non-virally-induced oligodendroglial progenitor cells (NiOPCs), which has been historically challenging for other investigators. We discovered the fibroblastic intracellular microenvironment is a significant barrier to the function of Olig2 - a master regulator of OPC phenotype - in direct reprogramming. Fibroblasts do not express Olig2 chaperones which are normally expressed in OPCs, causing Olig2 to become sequestered in the cytoplasm of transfected PMEFs. We relieved this barrier through fusion of a strong nuclear localization sequence (NLS) to Olig2, which repartitioned Olig2-NLS from the cytoplasm to the nucleus in transfected fibroblasts. The use of Olig2-NLS in iOPC reprogramming cocktails resulted in a drastic improvement in the yield of OPC-specific marker expression. The improvement associated with Olig2-NLS was insufficient to elicit significant myelin protein expression with the non-viral system, but the yield of virally-induced oligodendrocyte-like cells (iOLs) was improved dramatically. Further enhancements will be required to generate fully-reprogrammed NiOPCs, but the increased efficiency of viral iOPC generation is immediately useful for disease modeling and potentially in cell replacement therapies if human cells can be converted for the first time using this technique. During direct reprogramming, CNS-specific transcription factors are delivered to foreign intracellular contexts as a rule, which may reduce their ability to function effectively; we have shown this can be a critical yet under-appreciated determinant of the success or failure of a direct reprogramming system.

Taken together, the technological and intellectual advancements we describe herein represent significant improvements to non-viral transfection and reprogramming systems. These techniques can find broad appeal to the many researchers and clinicians deploying these systems. More specifically, we present significant steps towards realization of the dream of safe and effective autologous cell therapies against devastating and currently-intractable neurodegenerative diseases.