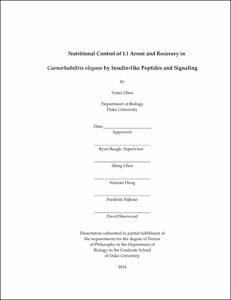 Animals must coordinate development with fluctuating nutrient availability. Nutrient availability governs post-embryonic development in Caenorhabditis elegans: larvae that hatch in the absence of food do not initiate post-embryonic development but enter "L1 arrest" (or "L1 diapause") and can survive starvation for weeks, while rapidly resume normal development once get fed. Insulin-like signaling (IIS) has been shown to be a key regulator of L1 arrest and recovery. However, the C. elegans genome encodes 40 insulin-like peptides (ILPs), and it is unknown which peptides participate in nutritional control of L1 arrest and recovery. Work in other contexts has identified putative receptor agonists and antagonists, but the extent of specificity versus redundancy is unclear beyond this distinction.

We measured mRNA expression dynamics with high temporal resolution for all 40 insulin-like genes during entry into and recovery from L1 arrest. Nutrient availability influences expression of the majority of insulin-like genes, with variable dynamics suggesting complex regulation. We identified 13 candidate agonists and 8 candidate antagonists based on expression in response to nutrient availability. We selected ten candidate agonists (daf-28, ins-3, ins-4, ins-5, ins-6, ins-7, ins-9, ins-26, ins-33 and ins-35) for further characterization in L1 stage larvae. We used destabilized reporter genes to determine spatial expression patterns. Expression of candidate agonists was largely overlapping in L1 stage larvae, suggesting a role of the intestine, chemosensory neurons ASI and ASJ, and the interneuron PVT in systemic control of L1 development. Transcriptional regulation of candidate agonists was most significant in the intestine, as if nutrient uptake was a more important influence on transcription than sensory perception. Scanning in the 5' upstream promoter region of these 40 ILPs, We found that transcription factor PQM-1 and GATA putative binding sites are depleted in the promoter region of antagonists. A novel motif was also found to be over-represented in ILPs.

TGF- &#946; and steroid hormone (SH) signaling have been reported to control the dauer formation along with IIS. Our preliminary results suggest they may also mediate the IIS control of L1 arrest and recovery, as the expression of several key components of TGF-&#946; and SH signaling pathway genes are negatively regulated by DAF-16, and loss-of-function of these genes partially represses daf-16 null phenotype in L1 arrest, and causes a retardation in L1 development.

In summary, my dissertation study focused on the IIS, characterized the dynamics and sites of ILPs expression in response to nutrient availability, revealed the function of specific agonistic ILPs in L1 arrest, and suggested potential cross-regulation among IIS, TGF-&#946; signaling and SH signaling in controlling L1 arrest and recovery. These findings provide insights into how post-embryonic development is governed by insulin-like signaling and nutrient availability.