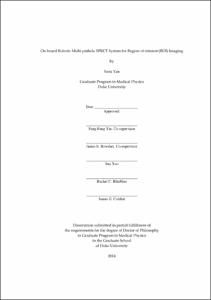 On-board image guidance, such as cone-beam CT (CBCT) and kV/MV 2D imaging, is essential in many radiation therapy procedures, such as intensity modulated radiotherapy (IMRT) and stereotactic body radiation therapy (SBRT). These imaging techniques provide predominantly anatomical information for treatment planning and target localization. Recently, studies have shown that treatment planning based on functional and molecular information about the tumor and surrounding tissue could potentially improve the effectiveness of radiation therapy. However, current on-board imaging systems are limited in their functional and molecular imaging capability. Single Photon Emission Computed Tomography (SPECT) is a candidate to achieve on-board functional and molecular imaging. Traditional SPECT systems typically take 20 minutes or more for a scan, which is too long for on-board imaging. A robotic multi-pinhole SPECT system was proposed in this dissertation to provide shorter imaging time by using a robotic arm to maneuver the multi-pinhole SPECT system around the patient in position for radiation therapy.

A 49-pinhole collimated SPECT detector and its shielding were designed and simulated in this work using the computer-aided design (CAD) software. The trajectories of robotic arm about the patient, treatment table and gantry in the radiation therapy room and several detector assemblies such as parallel holes, single pinhole and 49 pinholes collimated detector were investigated. The rail mounted system was designed to enable a full range of detector positions and orientations to various crucial treatment sites including head and torso, while avoiding collision with linear accelerator (LINAC), patient table and patient.

An alignment method was developed in this work to calibrate the on-board robotic SPECT to the LINAC coordinate frame and to the coordinate frames of other on-board imaging systems such as CBCT. This alignment method utilizes line sources and one pinhole projection of these line sources. The model consists of multiple alignment parameters which maps line sources in 3-dimensional (3D) space to their 2-dimensional (2D) projections on the SPECT detector. Computer-simulation studies and experimental evaluations were performed as a function of number of line sources, Radon transform accuracy, finite line-source width, intrinsic camera resolution, Poisson noise and acquisition geometry. In computer-simulation studies, when there was no error in determining angles (&alpha;) and offsets (&rho;) of the measured projections, the six alignment parameters (3 translational and 3 rotational) were estimated perfectly using three line sources. When angles (&alpha;) and offsets (&rho;) were provided by Radon transform, the estimation accuracy was reduced. The estimation error was associated with rounding errors of Radon transform, finite line-source width, Poisson noise, number of line sources, intrinsic camera resolution and detector acquisition geometry. The estimation accuracy was significantly improved by using 4 line sources rather than 3 and also by using thinner line-source projections (obtained by better intrinsic detector resolution). With 5 line sources, median errors were 0.2 mm for the detector translations, 0.7 mm for the detector radius of rotation, and less than 0.5° for detector rotation, tilt and twist. In experimental evaluations, average errors relative to a different, independent registration technique were about 1.8 mm for detector translations, 1.1 mm for the detector radius of rotation (ROR), 0.5° and 0.4° for detector rotation and tilt, respectively, and 1.2° for detector twist.

Besides prone breast imaging, respiratory-gated region-of-interest (ROI) imaging of lung tumor was also investigated. A simulation study was conducted on the potential of multi-pinhole, region-of-interest (ROI) SPECT to alleviate noise effects associated with respiratory-gated SPECT imaging of the thorax. Two 4D XCAT digital phantoms were constructed, with either a 10 mm or 20 mm diameter tumor added in the right lung. The maximum diaphragm motion was 2 cm (for 10 mm tumor) or 4 cm (for 20 mm tumor) in superior-inferior direction and 1.2 cm in anterior-posterior direction. Projections were simulated with a 4-minute acquisition time (40 seconds per each of 6 gates) using either the ROI SPECT system (49-pinhole) or reference single and dual conventional broad cross-section, parallel-hole collimated SPECT. The SPECT images were reconstructed using OSEM with up to 6 iterations. Images were evaluated as a function of gate by profiles, noise versus bias curves, and a numerical observer performing a forced-choice localization task. Even for the 20 mm tumor, the 49-pinhole imaging ROI was found sufficient to encompass fully usual clinical ranges of diaphragm motion. Averaged over the 6 gates, noise at iteration 6 of 49-pinhole ROI imaging (10.9 µCi/ml) was approximately comparable to noise at iteration 2 of the two dual and single parallel-hole, broad cross-section systems (12.4 µCi/ml and 13.8 µCi/ml, respectively). Corresponding biases were much lower for the 49-pinhole ROI system (3.8 µCi/ml), versus 6.2 µCi/ml and 6.5 µCi/ml for the dual and single parallel-hole systems, respectively. Median localization errors averaged over 6 gates, for the 10 mm and 20 mm tumors respectively, were 1.6 mm and 0.5 mm using the ROI imaging system and 6.6 mm and 2.3 mm using the dual parallel-hole, broad cross-section system. The results demonstrate substantially improved imaging via ROI methods. One important application may be gated imaging of patients in position for radiation therapy.

A robotic SPECT imaging system was constructed utilizing a gamma camera detector (Digirad 2020tc) and a robot (KUKA KR150-L110 robot). An imaging study was performed with a phantom (PET CT Phantom<super>TM</super>), which includes 5 spheres of 10, 13, 17, 22 and 28 mm in diameter. The phantom was placed on a flat-top couch. SPECT projections were acquired with a parallel-hole collimator and a single-pinhole collimator both without background in the phantom, and with background at 1/10th the sphere activity concentration. The imaging trajectories of parallel-hole and pinhole collimated detectors spanned 180 degrees and 228 degrees respectively. The pinhole detector viewed a 14.7 cm-diameter common volume which encompassed the 28 mm and 22 mm spheres. The common volume for parallel-hole was a 20.8-cm-diameter cylinder which encompassed all five spheres in the phantom. The maneuverability of the robotic system was tested by navigating the detector to trace the flat-top table while avoiding collision with the table and maintaining the closest possible proximity to the common volume. For image reconstruction, detector trajectories were described by radius-of-rotation and detector rotation angle &#952;. These reconstruction parameters were obtained from the robot base and tool coordinates. The robotic SPECT system was able to maneuver the parallel-hole and pinhole collimated SPECT detectors in close proximity to the phantom, minimizing impact of the flat-top couch on detector to center-of-rotation (COR) distance. In no background case, all five spheres were visible in the reconstructed parallel-hole and pinhole images. In with background case, three spheres of 17, 22 and 28 mm diameter were readily observed with the parallel-hole imaging, and the targeted spheres (22 and 28 mm diameter) were readily observed in the pinhole ROI imaging.

In conclusion, the proposed on-board robotic SPECT can be aligned to LINAC/CBCT with a single pinhole projection of the line-source phantom. Alignment parameters can be estimated using one pinhole projection of line sources. This alignment method may be important for multi-pinhole SPECT, where relative pinhole alignment may vary during rotation. For single pinhole and multi-pinhole SPECT imaging onboard radiation therapy machines, the method could provide alignment of SPECT coordinates with those of CBCT and the LINAC. In simulation studies of prone breast imaging and respiratory-gated lung imaging, the 49-pinhole detector showed better tumor contrast recovery and localization in a 4-minute scan compared to parallel-hole detector. On-board SPECT could be achieved by a robot maneuvering a SPECT detector about patients in position for radiation therapy on a flat-top couch. The robot inherent coordinate frames could be an effective means to estimate detector pose for use in SPECT image reconstruction.