Psychologische Musik, Joseph Joachim, and the Search for a New Music Aesthetic in the 1850s 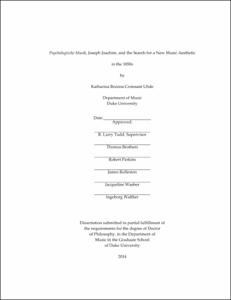 Exploring two main lines of inquiry, this dissertation investigates the style and aesthetic of the music of Joseph Joachim (1831-1907) and its references to composers such as Brahms, Liszt, Schumann, and Beethoven. First, rather than simply accepting the image of Joachim as the great nineteenth-century violinist and collaborator of Johannes Brahms who advocated the "canonization of the music of Bach, Beethoven, and Brahms," I ask who Joachim was in light of his own compositions and literary circle. Especially significant was his "soul mate" Gisela von Arnim (daughter of Bettine von Arnim), from the second generation of two major literary "institutions" - the Grimm brothers and Arnim/Brentano, the Des Knaben Wunderhorn-collectors. Joachim and Gisela's literary role-play throws light on her function as his inspiration and muse. Second, each chapter investigates Joachim's works as "psychological music," the term he himself applied. Given that psychology was not yet an established academic discipline in the 1850s, Joachim's use of "psychological" is all the more intriguing.

Sources including archival letters, manuscripts, and Joachim's published correspondence, as well as his compositions from (or begun) in the 1850s, reveal that "psychological music" was both a compositional approach and an aesthetic. Extensively using ciphers, anagrams, song quotations, literary titles and allusions, and occasionally melodramatic elements, Joachim's compositional aesthetic conflicted with his "absolute" aesthetic as a violinist in the later 19th century.

Joachim's relatively strict use of form, his idiosyncratic use of "motivic transformation," and his expressive studies of literary/historical characters in his overtures separated him from Liszt. Furthermore, while Joachim navigated harmony in ways criticized by Louis Spohr and contemporary critics as "ear-tearing harshness" (1852), the composer maintained an almost consistently symmetrical ("four-square") syntax. Joachim's "psychological" aesthetic was typified by idiosyncratic, individual stylistic features like "trapped motives," captured by (sometimes obsessive) repetition, and he applied ciphers much more conspicuously than did Schumann. In the end, Joachim's "psychological music" displays three overarching features: first, extramusical programs from autobiographical and/or literary contexts; second, the implicit or explicit dedication of the works to Gisela von Arnim; and third, supporting correspondence marking the work as an "outlet" for Joachim's self-perceived, psychological inner turmoil.