Maladaptive Rule-Governed Behavior in Anorexia Nervosa: The Need for Certainty and Control 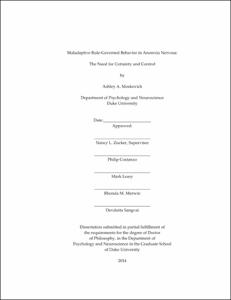 Anorexia nervosa (AN) is a dangerous disorder characterized by unrelenting rigidity that continues even in the presence of deadly outcomes. Despite this, our understanding of factors that promote and maintain rigidity is lacking. The current paper proposes a model suggesting that rigid behaviors in AN can be formulated as maladaptive rule-governed behavior that emerges in contexts of uncertainty and loss of control, such as in the presence of affective arousal. An empirical study examining the differences between individuals weight recovered from AN (AN-WR) and healthy controls (CN) on parameters of rule-governed behavior in neutral and stressful contexts is described. Seventy-four adults (AN-WR: 36; CN: 38) were randomized to undergo either a stressful or neutral mood manipulation and then completed a laboratory assessment of rule-governed behavior, along with questionnaires measuring difficulties with uncertainty. While the AN-WR group demonstrated greater flexibility in rule implementation compared to the CN group, they evidenced greater impairment in behavioral extinction. Furthermore, although affective arousal did not significantly impact rule-governed behavior as expected, difficulties tolerating uncertainty were significantly related to rule-governed outcomes exclusively in the AN-WR group. Taken together, findings provide preliminary support for maladaptive rule-governed behavior in AN and suggest that this is related to an intolerance of uncertainty. Findings and treatment implications are discussed in light of study limitations.