Dynamics on and of Complex Networks 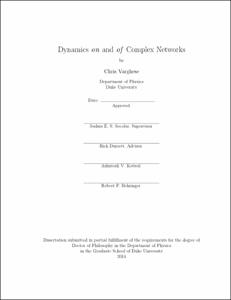 Networks -- abstract objects composed of \emph{vertices} connected by \emph{edges}, are ubiquitous in the real world.

Examples such as social networks, the world wide web, and neural networks in the brain

are constantly evolving in their topology, the state of their vertices, or a combination of the two.

This dissertation presents a computational and theoretical study of three models of network dynamics, one corresponding to each of these modes of evolution.

The first study models the disintegration of a social network of voters with binary opinions, who prefer to be connected to others with the same opinion.

We study two versions of the model: the network evolves by voters in discordant ties choosing to either

adopt the opinion of their neighbors, or to rewire their ties to some randomly chosen voter of (i) the same, or (ii) any, opinion.

We examine how the probability of rewiring, and the initial fraction $\rho_{\textrm{i}}$ in the minority,

determine the final minority fraction $\rho_{\textrm{f}}$, when the network has bifurcated.

and below which there is full concensus.

In case (ii), the behavior above the critical probability, that now depends on $\rho_{\textrm{i}}$, is similar; but

below it, $\rho_{\textrm{f}}$ matches the result of starting with $\rho_{\textrm{i}} = 1/2$. Using simulations and approximate calculations, we explain why these two nearly identical

models have such dramatically different behaviors.

Vertices take on the binary states occupied(1) or vacant(0).

We consider two versions of the model -- Vertex QCP, and Edge QCP, corresponding to

We study the fraction of occupied vertices at steady state as a function of the birth rate, keeping

the death rate constant. To investigate the effects

of network topology, we study the QCP on homogeneous networks with a bounded or rapidly decaying degree distribution,

and those with a heavy tailed degree distribution.

From our simulation results and mean field calculations, we conclude

that on the homogeneous networks, there is a discontinuous phase transition with a

region of bistability, whereas on the heavy tailed networks, the

transition is continuous. Furthermore, the critical birth rate is positive

in the former but zero in the latter.

In the third study, we propose a general scheme for spatial networks evolving in order to reduce their total edge lengths.

We study the properties of the

equilbria of two networks from this class, one of which interpolate between two well studied objects: the Erd\H{o}s-R\'{e}nyi random graph, and the random geometric graph.

The first of our two evolutions can be used as a model for a social network where individuals have fixed opinions about a number of issues and adjust their ties to be connected to people with similar views.

The second evolution which preserves the connectivity of the network has potential applications in the design of transportation networks and other distribution systems.