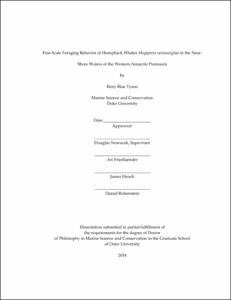 High-resolution bio-logging tools were used to examine the fine-scale foraging behaviors of humpback whales (Megaptera novaeangliae) in the coastal waters of the Western Antarctic Peninsula during the austral autumn of 2009 and 2010. Discrete feeding events (i.e., lunges) were inferred from the biologging records of thirteen whales, including a mother and her calf. In general, humpback whales exhibited efficient foraging behaviors that allowed them to maximize energetic gains and minimize energetic costs as predicted by optimal foraging theory. They fed at a continuous and high rate in the upper portion of the water column (< 100 m) from approximately dusk to dawn when their prey (Antarctic krill, Euphausia superba) were most vulnerable and less costly to acquire (i.e., near the surface). When forced to dive to greater depths, they adjusted their behaviors (e.g., descent and ascent rates) so that they could maximize their foraging durations and increase their lunging rates. In addition, humpbacks appeared to accept short term (i.e., dive by dive) costs associated with depleted oxygen stores in favor of maximizing long term (i.e., daily) energetic gains. Such efficient behaviors are particularly beneficial for mother-calf pairs who have additional energetic costs associated with foraging, such as lactation (mother), growth (calf), and maintaining proximity. In addition, because the physiology of humpback whales is poorly understood yet critically important for predicting their behaviors in response to fluctuations in their environmental conditions, foraging behaviors inferred from the bio-logging records were used to estimate their metabolic rates, oxygen storage capacities, and oxygen replenishment rates under the framework of optimal foraging theory. This research suggests that the current techniques used to estimate humpback whale oxygen stores is appropriate but that the estimation of metabolic rates of humpbacks while foraging and while traveling need to be addressed further. This work aims to increase the current understanding of humpback whale foraging behaviors along the Western Antarctic Peninsula so that appropriate measures can be taken to aid in their recovery and in the sustainability of the Antarctic marine ecosystem.