Molecular Mechanism of Persistence Mediated by HipBA: Gene Regulation of HipBA in Escherichia coli and Identification of Consensus Motif of HipA Substrates 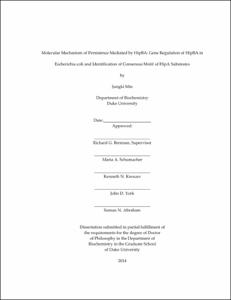 Multidrug tolerance (MDT) is the ability of pathogenic bacteria to survive killing from exposure to multiple antibiotics, and is a major obstacle in the treatment of infectious disease. A small population of bacteria (0.0001%) termed persisters is the culprit that causes MDT and allows these cells to persist. In <italic>Escherichia coli</italic>, the HipBA toxin&ndash;antitoxin pair plays a role in multidrug tolerance. HipA, a 50 kDa serine protein kinase, is the more stable toxin and abrogates cell growth in the absence of the more labile antitoxin HipB. HipB is a transcription repressor that binds to the four conserved (TATCCN8GGATA) operator sites of the <italic>hipBA</italic> promoter to autoregulate expression of the <italic>hipBA</italic> operon. Delineation of the molecular mechanism of HipB&ndash;<italic>hipBA</italic>operator binding is critical to understand fully the regulation of persistence by HipB. Thus, we determined the equilibrium dissociation constants (Kd) of HipB for each of the four <italic>hipBA</italic> operators and the paired operator sites <italic>O1O2</italic> and <italic>O3O4</italic>. We found that the affinity of HipB for binding the <italic>O1</italic> and <italic>O3</italic> operators is seven to eight times higher than for the <italic>O2</italic> and <italic>O4</italic> operators. In addition, the affinity of HipB for the <italic>O1O2</italic> and <italic>O3O4</italic> operators is at least four times higher than the <italic>O1</italic> and <italic>O3</italic> operators. The HipB&ndash;operator complex structures reveal that HipB makes the same key contacts to the conserved TATCC motifs and bends each operator DNA by the same extent between 50&deg; to 70&deg; implying thus the affinity differences are attributed to indirect readout of the 8 base pair spacer (N8). Mutational studies on residues involved in HipB&ndash;DNA interaction revealed the contribution of a series of selected residues to binding affinity with residues K38 and Q39 contributing greatly to affinity whereas other base contacting residues S29 and A40 contribute less to affinity. Surprisingly residue S43, which is involved in a hydrogen bond to the DNA phosphate backbone contributes more than expected because S43 forms a hydrogen bond network with nearby water molecules.

HipA was the first described <italic>bona fide</italic> persistence factor. The <italic>hip</italic> locus was discovered through a mutagenesis screen whereby <italic>hipA7</italic> was isolated. Described herein, biochemical and structure&ndash;function studies on HipA7, the gene product of the high persistent mutant allele having two point mutations G22S and D291A, revealed that the D291A mutation weakens the binding affinity for HipB by 3 to 4 fold. The HipA7 structure revealed the conformational heterogeneity of the P&ndash;loop motif (the ATP binding motif), which suggests a dynamic role of the loop in regulation of the kinase activity of HipA. To identify <italic>in vivo</italic> HipA substrates, we developed a mass spectrometry (MS)&ndash;based kinase assay, which led to identification of a novel phosphorylation site (residue S348) on HipA and a proposed consensus phosphorylation motif +&#981;S, where +, &#966; and S designate a positive, hydrophobic and serine amino acid residue, respectively. Phosphorylation of peptides with this consensus motif, including the S150 (EENDF<bold><underline>RIS</underline></bold>VAGAQEK), S348 (TGI<bold><underline>HIS</underline></bold>DLK) and GltX (GK<bold><underline>KLS</underline></bold>KRH), was confirmed subsequently by the MS&ndash;based kinase assay. Further analysis of the HipA7 structure suggested that HipA might undergo pyrophosphorylation on residue S150, and the MS&ndash;based kinase assay confirmed pyrophosphorylation of HipA.

Thus, our data support that HipA is a persistence factor via its kinase activity and precise <italic>hipBA</italic> gene regulation through HipB binding tightly to <italic>O1</italic> and <italic>O3</italic> is critical for the survival of bacteria in the presence of antibiotics. In addition, we propose a consensus motif for HipA substrates.