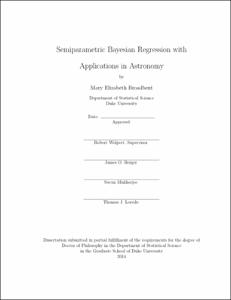 In this thesis we describe a class of Bayesian semiparametric models, known as Levy Adaptive Regression Kernels (LARK); a novel method for posterior computation for those models; and the applications of these models in astronomy, in particular to the analysis of the photon fluence time series of gamma-ray bursts. Gamma-ray bursts are bursts of photons which arrive in a varying number of overlapping pulses with a distinctive "fast-rise, exponential decay" shape in the time domain. LARK models allow us to do inference both on the number of pulses, but also on the parameters which describe the pulses, such as incident time, or decay rate.

In Chapter 2, we describe a novel method to aid posterior computation in infinitely-divisible models, of which LARK models are a special case, when the posterior is evaluated through Markov chain Monte Carlo. This is applied in Chapter 3, where time series representing the photon fluence in a single energy channel is analyzed using LARK methods.

Due to the effect of the discriminators on BATSE and other instruments, it is important to model the gamma-ray bursts in the incident space. Chapter 4 describes the first to model bursts in the incident photon space, instead of after they have been distorted by the discriminators; since to model photons as they enter the detector is to model both the energy and the arrival time of the incident photon, this model is also the first to jointly model the time and energy domains.