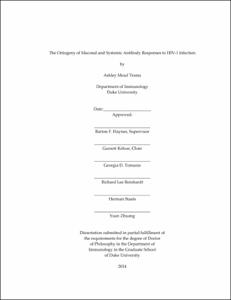 Chapter 4 details the study of restricted VH and VL gene segment usage for gp41 and gp120 antibody induction following acute HIV-1 infection; mutations in gp41 lead to virus enhanced neutralization sensitivity. The B cell repertoire of antibodies induced in a HIV-1 infected African individual, CAP206, who developed broadly neutralizing antibodies (bnAbs) directed to the HIV-1 envelope gp41 membrane proximal external region (MPER), is characterized. Understanding the selection of virus mutants by neutralizing antibodies is critical to understanding the role of antibodies in control of HIV-1 replication and prevention from HIV-1 infection. Previously, an MPER neutralizing antibody, CAP206-CH12, with the binding footprint identical to that of MPER broadly neutralizing antibody 4E10, that like 4E10 utilized the VH1-69 and VK3-20 variable gene segments was isolated from this individual (Morris et al., 2011). Using single B cell sorting, RT- PCR methods, and recombinant antibody technology, Chapter 4 describes the isolation of a VH1-69, Vk3-20 glycan-dependent clonal lineage from CAP206, targeted to gp120, that has the property of neutralizing a neutralization sensitive CAP206 transmitted/founder (T/F) and heterologous viruses with mutations at amino acids 680 or 681 in the MPER 4E10/CH12 binding site. These data demonstrate sites within the MPER bnAb epitope (aa 680-681) in which mutations can be selected that lead to viruses with enhanced sensitivity to autologous and heterologous neutralizing antibodies.

In Chapter 5, I have completed a comparison of evolution of B cell clonal lineages in two HIV-1 infected individuals who have a predominant VH1-69 response to HIV-1 infection--one who produces broadly neutralizing MPER-reactive mAbs and one who does not. Autologous neutralization in the plasma takes ~12 weeks to develop (Gray et al., 2007; Tomaras et al., 2008b). Only a small subset of HIV-1 infected individuals develops high plasma levels of broad and potent heterologous neutralization, and when it does occur, it typically takes 3-4 years to develop (Euler et al., 2010; Gray et al., 2007; 2011; Tomaras et al., 2011). The HIV-1 bnAbs that have been isolated to date have a number of unusual characteristics including, autoreactivity and high levels of somatic hypermutations, which are typically tightly regulated by immune control mechanisms (Haynes et al., 2005; 2012b; Kwong and Mascola, 2012; Scheid et al., 2009a). The VH mutation frequencies of bnAbs average ~15% but have been shown to be as high as 32% (reviewed in Mascola and Haynes, 2013; Kwong and Mascola, 2012). The high frequency of somatic hypermutations suggests that the B cell clonal lineages that eventually produce bnAbs undergo high-levels of affinity maturation, implying prolonged germinal center (GC) reactions and high levels of T cell help. To study the duration of HIV-1- reactive B cell clonal persistence, HIV-1 reactive and non HIV-1- reactive B cell clonal lineages were isolated from an HIV-1 infected individual that produces bnAbs, CAP206, and an HIV-1 infected individual who does not produce bnAbs, 004-0. Single B cell sorting, RT-PCR and recombinant antibody technology was used to isolate and produce monoclonal antibodies from multiple time points from each individual. B cell sequences clonally related to mAbs isolated by single cell PCR were identified within pyrosequences of longitudinal samples of these two individuals. Both individuals produced long-lived B cell clones that persisted from 0-232 weeks in CAP206, and 0-238 weeks in 004-0. The average length of persistence of clones containing members isolated from two separate time points was 91.5 weeks both individuals. Examples of the continued evolution of clonal lineages were observed in both the bnAb and non-bnAb individual. These data indicated that the ability to generate persistent and evolving B cell clonal lineages occurs in both bnAb and non-bnAb individuals, suggesting that some alternative host or viral factor is critical for the generation of highly mutated broadly neutralizing antibodies.

Together the studies described in Chapter 3-5 show that multiple factors influence the antibody response to HIV-1 infection. The initial antibody response to HIV-1 Env gp41 can be shaped by a B cell response to intestinal commensal bacteria prior to HIV-1 infection. VH and VL gene segment restriction can impact the B cell response to multiple HIV-1 antigens, and virus escape mutations in the MPER can confer enhanced neutralization sensitivity to autologous and heterologous antibodies. Finally, the ability to generate long-lived HIV-1 clonal lineages in and of itself does not confer on the host the ability to produce bnAbs.