A Search for tt &#772; Resonances in the Lepton Plus Jets Channel from Proton-Proton Collisions at &#8730;s = 8 TeV with the ATLAS Detector 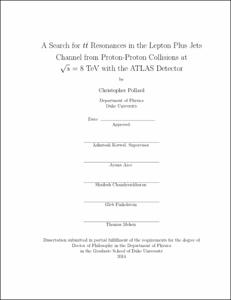 A search for the resonant production of top quark pairs in

data which were collected by the ATLAS detector.

The lepton plus jets final state is used, and the top pair invariant

mass spectrum is probed for local excesses above the Standard Model

No evidence for resonant top pair production is found.

95\% credibility limits are set on the cross section times branching

pairs and the Kaluza-Klein excitation of the gluon in a

Randall-Sundrum model are excluded for masses below 1.8 and 2.0~TeV,

The expected sensitivity to new physics at ATLAS with proton-proton

collisions delivered by a High Luminosity Large Hadron Collider is

resonances, and an extended Higgs sector with up to 3000 inverse

femtobarns of integrated luminosity is investigated based on the fast