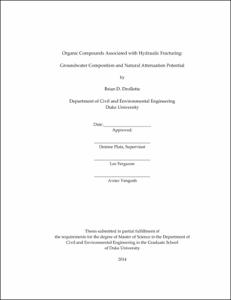 As the United States slowly transitions from coal and foreign oil to more renewable energy sources, domestic natural gas is being utilized as an intermediate "bridge fuel". Advances in horizontal drilling and hydraulic fracturing have increased gas extraction and exploration over the past ten years. The massive quantities of fluids used to fracture gas-producing shale plays contain potentially toxic chemicals and the wastes are highly saline and contain naturally occurring radioactive materials. It is unclear if there are risks to shallow drinking water aquifers and if the chemical constituents of fracking fluid are inherently biodegradable if released into the environment. Monitoring the fate of these chemicals as they enter the environment is critical to understanding potential health hazards and persistence. Here, groundwater monitoring for organic compounds coupled with spatial data analysis indicates no subsurface contamination from hydraulic fracturing of the Marcellus Shale in northeastern Pennsylvania. However, a chemical fingerprint is presented suggesting increased organic compounds in shallow groundwater are due to subsurface mixing with brine containing geogenic hydrocarbons from the Marcellus Shale.

To investigate the fate and extent of the chemicals used in hydraulic fracturing and the associated wastes if released into the environment, bench-scale reactor experiments were performed. These reactors contained a synthetic hydraulic fracturing fluid and activated sludge from a wastewater treatment plant. Bulk organic carbon decreased upwards of 76 ± 2% in a freshwater mixture and 69 ± 2% in a 10,000 mg L-1 NaCl saline solution. Furthermore, gasoline range organic compounds degraded over 99 ± 1% for both solutions while diesel range organic compounds recorded significantly less degradation in the saline solution than the freshwater solution (68 ± 2% and 92 ± 1%, respectively). Recalcitrant compounds of interest proved to be in the higher-molecular weight range of diesel range organic constituents. Additionally, salinity decreased the initial concentrations of both gasoline range and diesel range organic compounds in the synthetic frack solution. To explain the concentration differences in the saline reactors, the compound losses due to volatilization were quantified and further loss mechanisms were suspected to be sorption to particle surfaces.