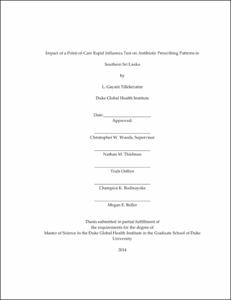 Background: Acute febrile respiratory illnesses, including influenza, account for a large proportion of ambulatory care visits worldwide. In the developed world, these encounters commonly result in unwarranted antibiotic prescriptions; data from more resource-limited settings are lacking. The purpose of this study was to describe the epidemiology of influenza among outpatients in southern Sri Lanka and to determine if access to rapid influenza test results was associated with decreased antibiotic prescriptions.

Methods: In this pretest- posttest study, consecutive patients presenting from March 2013- April 2014 to the Outpatient Department of the largest tertiary care hospital in southern Sri Lanka were surveyed for influenza-like illness (ILI). Patients meeting World Health Organization criteria for ILI-- acute onset of fever &#8805;38.0°C and cough in the prior 7 days--were enrolled. Consenting patients were administered a structured questionnaire, physical examination, and nasal/nasopharyngeal sampling. Rapid influenza A/B testing (Veritor System, Becton Dickinson) was performed on all patients, but test results were only released to patients and clinicians during the second phase of the study (December 2013- April 2014).

Conclusions: Influenza virus accounted for almost 50% of acute febrile respiratory illness in this study, but most patients were prescribed antibiotics. Providing rapid influenza test results to clinicians was associated with fewer antibiotic prescriptions, but overall prescription of antibiotics remained high. In this developing country setting, a multi-faceted approach that includes improved access to rapid diagnostic tests may help decrease antibiotic use and combat antimicrobial resistance.