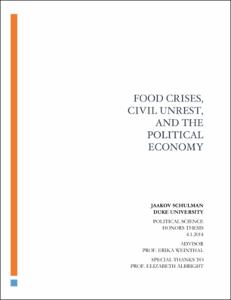 View / Download
1.1 Mb
Date
Author
Schulman, Jaakov
Repository Usage Stats
291
views
1,013
downloads
Abstract
Contemporary notions of food security are ever more connected to the commodification and globalization of modern agriculture. As nations continue to count on consistent and reliable commodity markets to provide food imports at competitive rates, unexpected externalities can prompt sudden spikes in worldwide food prices with severe consequences to poorer populations in developing countries. In some cases, such cost crises provoke episodes of violent unrest and place civil safety and regime stability in jeopardy. This research paper examines the specific characteristics of a political economy connected to occurrences of food-related violent civil unrest, which occurred in response to the most recent 2007-2008 food price crisis. First, this paper outlines the mechanisms of the 2007-2008 crisis and the historical context from which it emerged. Second, this paper reviews the array of existing research that connects changes in food prices with the incidence of civil unrest while presenting explanations for why such riots occurred in some countries and not others. Third, this paper presents a set of empirical measures that attempt to quantify the specific characteristics of a political economy that capture variation between the developing economies in Africa. The continent was chosen as the research sample because it experienced significant cases of civil unrest that coincided with the food price crisis. Fourth, this paper statistically tests those measures of the political economy against metrics for food-related civil unrest to reveal correlations. Finally, Egypt's experience over the course of the 2007-2008 crisis is examined as a case example. The response of Egypt’s government to the crisis is examined in order to place the quantitative models within a concrete, qualitative context. The paper proposes three empirical models with varying approaches to operationalizing the political economies of African countries around the 2007-2008 crisis. The models offer complementary explanations for variation in the incidence of food-related unrest and reliably explain the Egyptian case example as examined in this paper. Finally, the models suggest how governments may augment their capacity to take action to reduce the consequences of price crises by focusing on specific aspects of governance and economic policy.
Description
Honors Thesis for Political Science
Type
Honors thesis
Department
Political Science
Subject
Food riots
Food crisis
Food prices
Social conflict
Food policy
Africa
Permalink
https://hdl.handle.net/10161/9146
Citation
Schulman, Jaakov (2014). Food Crises, Civil Unrest, and the Political Economy. Honors thesis, Duke University. Retrieved from https://hdl.handle.net/10161/9146.
Collections
More Info
Show full item record