"Are You Gay?": A Queer Ethnography of Sex and Sexuality in Cairo 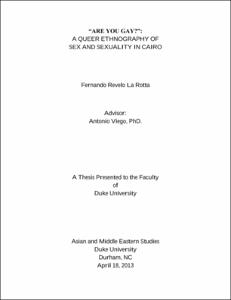 View / Download
779.7 Kb
Date
Author
Revelo La Rotta, Fernando
Repository Usage Stats
891
views
2,286
downloads
Abstract
Focusing specifically in urban cosmopolitan Cairo during the aftermath of the alleged January 25th Revolution, this ethnographic project is an invitation to a deeper exploration of sex and sexuality in the Middle East. During the 18 days of the January 25th Revolution, media outlets worldwide discussed the historic event as not only a site of political opportunity, but also as the beginning of a sexual(ity) revolution that had the potential to transform understandings of gender and sexuality in Egypt, the “gay isues” by pointing towards the colliding assemblage of revolutions, same-sex practices, Arabness, identity construction, human rights activism, Islamic theology and cyberspaces. “Are You Gay?” conceptualizes the sexualities of Egyptian men from within the interweaving of institutions, religions, culture and histories that produce them. This thesis also deploys queer theory to queer ethnographic practice by analyzing sexual experience and deconstructing the normalized ethnographic time and space by entering fluid cyberspaces—a virtual manifestation of the forces of globalization. This project also seeks to mobilize queer theory towards the East, specifically Cairo and the Middle East, to conceptualize how sexual subjectivities are created at the nexus of encounters between Western understandings of sexuality and traditional expressions and understandings of male same sex practices in the Middle East. Lastly, by using queer theory, “Are You Gay?” seeks to open up sites of resistance through the conceptual power of queerness for what I term queer subjects in Egypt.
Description
Undergraduate honors thesis presented to the department of Asian and Middle Eastern Studies.
Type
Honors thesis
Department
Asian and Middle Eastern Studies
Subject
Queer Theory
Egypt
Sexuality
Ethongraphy
Cyberspaces
Permalink
https://hdl.handle.net/10161/9190
Citation
Revelo La Rotta, Fernando (2014). "Are You Gay?": A Queer Ethnography of Sex and Sexuality in Cairo. Honors thesis, Duke University. Retrieved from https://hdl.handle.net/10161/9190.
Collections
More Info
Show full item record